This semi-remake of Holiday Inn (the first movie in which Irving Berlin’s perennial, Oscar-winning holiday anthem was featured) doesn’t have much of a story, but what it does have is choice.  Bing Crosby, Danny Kaye, Rosemary Clooney, an all-Irving Berlin song score, classy direction by Hollywood vet Michael Curtiz (Casablanca, The Adventures of Robin Hood), VistaVision (the very first feature ever shot in that widescreen format), and ultrafestive Technicolor! 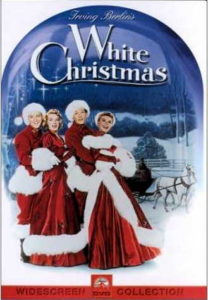 Crosby and Kaye are song-and-dance men who hook up, romantically and professionally, with a “sister” act (Clooney and Vera-Ellen) to put on a Big Show to benefit the struggling ski-resort lodge run by the beloved old retired general (Dean Jagger) of their WWII Army outfit. Crosby is cool, Clooney is warm, Kaye is goofy, and Vera-Ellen is leggy. Songs include: “Sisters” (Crosby and Kaye do their own drag version, too), Snow, We’ll Follow the Old Man, Mandy, Count Your Blessings Instead of Sheep, and more. Christmas would be unthinkable without White Christmas. —Jim Emerson