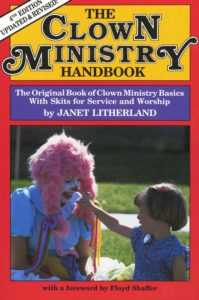 I rate it 5 clowns

on a 5-clown scale (a very rare occurrence).

Don’t forget to check out Everything New and Who’s Who in Clown Ministry, a sequel and follow-up volume by the same author.

Chapter One: In the Beginning
An overview of the activities of clowns throughout history
Chapter Two: But the Greatest of These Is Love
How clowns demonstrate devotion to God by their services and actions
Chapter Three: A Merry Heart Maketh A Cheerful Countenance
Costume and facial make-up of “pure” clown types listed and illustrated
Chapter Four: Put on the New Man
The need for a balance between what the clown looks like and what he is made of, inside.   Stresses importance of wardrobe, props, techniques, name and feelings
Chapter Five: Let Us Exhalt His Name Together
Practical and spiritual suggestions for achieving and maintaining group organization while ministering
Chapter Six: Go Ye Into All The World
The “where” and “how” of clown ministry.   Places to go for outreach ministry, things to do and what to expect
Chapter Seven: Things Which Are Not Seen Are Eternal
The relationship of God and man.   How the clown can be the link between both.   The importance of prayer.
Chapter Eight: Clown Gags
Suggestions to the clown for achieving rapport with audience, through laughter
Chapter Nine: Scripture Skits for Clown Groups
Includes five skits, each with several clown parts.   Skits with a message for Christian living
Chapter Ten: More Performance Skits for Clown Ministry in Church
Performance scripts for use within a worship service
Chapter Eleven: Balloon Art
How to entertain an audience by making a wide variety of objects from balloons
Chapter Twelve: Caring and Sharing Clowns
Eleven clown ministers tell how they came to be clowns for Christ
Resources
Bibliography

About the author of Clown Ministry Handbook, Janet Litherland

Janet Litherland is the author of the novels, “Sweet Justice,” “The Long Road Home,” “Song of the Heart,” “Vanished,” “Chain of Deception,” and “Discovery In Time,” as well as 10 nonfiction books and numerous articles and stories for national magazines. Her “Absolutely Unforgettable Parties” reached #2 on the Small Press Top 10 best-sellers list. “The Clown Ministry Handbook,” a GROUP magazine Book of the Year, is currently in its fourth edition.

Formerly a professional actor/singer/dancer, Janet appeared as Ann Rutledge in the New York touring company production of Young Abe Lincoln, as Beauty in Sleeping Beauty (Cricket Theater, New York), and in many musical productions including Showboat, Brigadoon, Finian’s Rainbow, Gypsy, Bye Bye Birdie, The Music Man and others. She also performed for the U.S.O. at military installations in Greenland, Iceland, Newfoundland, Labrador and the Baffin Islands. Her theatrical background led her to author more than 100 music/drama-related scripts. She has taught college extension courses in creative writing and has worked as an editor and writing coach. Janet is an enthusiastic traveler who enjoys doing on-site research for her novels, particularly in Europe.

Handbook for the Magical Party Clown

Everything New and Who’s Who in Clown Ministry