Handbook for the Magical Party Clown

Handbook For The Magical Party Clown – Promotions, Routines, Balloons, Props & Gags, Everything You Need to Know by Donald Sminkey

A wonderful book, but aimed at a particular audience: clowns who perform at parties. It does not cover clowning, clown make up, character development, or anything related. (I recommend Creative Clowning for a good starting point). Likewise, it does not teach how to perform magic tricks, and assumes that you already have a basic knowledge of these two arts. However, if that description fits you, it is worth its’ weight in gold. 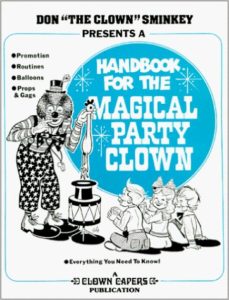 It covers organizing your material, inventory, etc., promotion, stage management, routining your show, performing, and post-show follow-up. It’s a very well done book, and includes numerous illustrations, including several props, including a show table, that you can build. I have only one criticism of the book – it consistently refers to articles in other publications, such as MUM, Calliope, Magigram, etc. I understand the restrictions of publication, although it will be difficult for some readers to find some of these resources.

Even so, I rate it 4 clowns

Table of Contents of Handbook for the Magical Party Clown

From the Author
Way back in 1983 I was approached by the President of our clown club, Kapitol Klowns, Alley #6 of the Clowns of America. He suggested that I might want to give a lecture on clown magic at the club’s third annual clown workshop. I agreed, and then proceeded to put down some ideas in the form of a small lecture pamphlet. It was my idea to consolidate all the information required for a clown or magician trying to get started as a professional entertainer for children’s parties. Well, the lecture pamphlet kept growing as a wealth of material was gathered from many sources. The final result was not a lecture pamphlet, but the Handbook for the Magical Party Clown. The Handbook will save the beginner the many hours of exhausting research that I endured during my beginning years.

The author, Don “The Clown” Sminkey, info@clowncapers.com , July 10, 1999
This book has been well received by clowns and magicians.
My Handbook has been well received by clowns and magicians all over the world. I have received many grateful letters from beginners who have commented that my Handbook has saved them many hours of research and study. The Handbook has also been favorably reviewed by many professional entertainers. This our 3rd edition of the Handbook, and I have tried to keep the material current. I hope you will get many ideas from our book that you can use in your party shows, walk-arounds, stage shows and holiday shows. –This text refers to the Paperback edition.

About the Author
Don “The Clown” Sminkey has been performing magic as a hobby for over 30 years. He began to perform as a professional magical clown in 1980. He is a member of the Society of American Magicians and Clowns of America International, and has attended many clown and magic conventions. His wife and daughters joined the team in 1981 and the Clown Capers company was born. Don has lectured at local clown clubs in the Washington, DC metropolitan area, and has taught many clowns and magicians who have later worked for Clown Capers.

Compassionate Laughter: Jest for Your Health