A feature-length musical motion picture of the classic tale about the puppet who becomes a real boy. Danny Kaye plays “Gepetto,” the woodcarver; and Sandy Duncan plays “Pinocchio,” the irrepressible puppet. 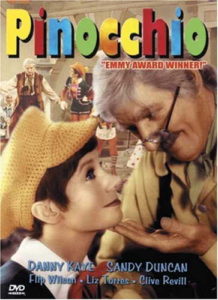 This musical adaptation of Pinocchio from 1976 features the incomparable talents of Danny Kaye, Sandy Duncan, Flip Wilson, and Clive Revill. Framed by the story of a young theater girl’s desire to study and work apart from her father, the story of Pinocchio is presented as a subplay with the young girl as Pinocchio (Sandy Duncan) and her father as Geppetto (Danny Kaye). The famous Carlo Collodi story of a lonely woodcutter whose marionette comes to life is presented faithfully and engagingly. The costumes are bright and fun, and the sets are suitably simple. The music, which features many Billy Barnes songs, showcases everything from big Broadway sounds to some truly beautiful ballads. Add to that lots of energetic dancing choreographed by Ron Field, and the result is a compelling performance by Kaye, Duncan, and the rest of the cast. —Tami Horiuchi

Pinocchio: If you don’t mind Mr. Stroganoff, for my performance today, I’ll just take half of these gold coins to bring home to Papa. What’s half of twenty-eight?
Boris Stroganoff: Five!

Fox: How would you like to bring home to your papa, not five, not fifty, but a thousand shiny gold coins?
Pinocchio: Is that more than five? I haven’t learned arithmetic yet.
Fox: It’s more than five. It’s even more than two!

Pinocchio: Rich is good?
Fox: Rich is always good.
Cat: Poor is always bad.
Pinocchio: Isn’t there anything in between?
Fox: Yes, aggravation.

Geppetto: What’s happening to you Pinocchio is you told a lie. And when you lie, it’s-a plain like the nose on you face.

A Song is Born