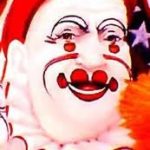 Inducted into the 1991 Clown Hall of Fame

Frankie Saluto was short in stature, but quickly became big in clowning circles. He began clowning in 1928 and shortly afterwards joined the Ringling Brothers Circus. He became known as the whiteface dwarf with the large live rabbit. His career also included an interpretation of a miniature Charlie Chaplin and he was a member of the Ringling Giants, a midget baseball team that promoted the circus. Frankie Saluto had the distinction of being chosen as the “most popular clown with Ringling Brothers Barnum & Bailey“, for which he was awarded a diamond stickpin. Pictured frequently in circus programs as well as appearing in books on circus and clowning, he retired at age 65 after 46 years of clowning.