Jerry Lewis conjured up one of his simplest concepts for this 1961 hit, but it required a lot of scaffolding. The Ladies Man puts love-scarred Jerry (who has sworn off women) in an all-girl boarding house, infuriated by the constant temptation. Except for the opening sequences, the film is entirely shot in the four-story-high, cut-away set of the boarding house, one of the most elaborate indoor sets ever made in Hollywood up to that time. Lewis, as director, finds dozens of angles to shoot within the set; this movie is one of the reasons the French are always talking about his directorial genius. (Jean-Luc Godard, who once called Lewis “the only one in Hollywood who’s doing something different, the only one who isn’t falling in with the established categories,” borrowed the cut-away building idea for his film Tout va bien.) 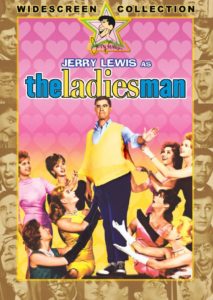 There’s some great physical stuff, such as Lewis trying desperately to save the crushed hat of visiting tough guy Buddy Lester, plus a lot of Lewis vocal whining, especially concerning his name: Herbert Heebert, not Herby Heebert. The film has its share of gags falling flat, but for Lewis fans it’s prime stuff, not far from the high-water mark of The Nutty Professor. —Robert Horton

In The Ladies Man, Herbert H. Herbert (Lewis) has been dumped by his childhood sweetheart and has sworn off women. Then he unwittingly takes a job as a houseboy at an all-female boarding house. Surrounded by women, Herbert becomes the go-to guy who means well but does very little right.