Synopsis of Way… Way Out

Way … Way Out is set in the “far future” of 1986 (!), there’s a problem with the American lunar base — the men stationed there for long-term missions are going stir-crazy from lack of … female companionship.   The American government decides to solve the problem by sending up a married American team in their place — but the only astronaut qualified is Pete Mattemore (Jerry Lewis), who is still single.

He considers himself a confirmed bachelor, but tries to court fellow astronaut Ellen Forbes (Connie Stevens) – one of the funniest parts of the movie.  Especially when their romantic dinner is interrupted by one of his former girlfriends! 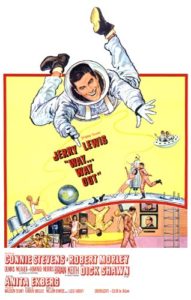 She is reluctant at first, but agrees to marry him “in name only” for the sake of the mission. The marriage actually takes place (in a very funny rush) on the elevator up to the space capsule.  And in a slapstick moment of trying to get buckled into their spaceship in the few seconds before blast-off.

Once there, they replace the previous Americans (played hilariously by Howard Morris as the girl-crazed Schmidlap and Dennis Weaver as Hoffman). Soon, the newlywed couple begins falling in love, but matters are complicated by their “neighbors” — an unmarried Soviet couple, played by Dick Shawn and Anita Ekberg who keep “dropping by” and are trying to conceive the first “moon baby”…  And a different kind of space race is under way.  If Connie can get her new husband to pay attention to her …

Editorial review of Way … Way Out courtesy of Amazon.com

The Americans and Russians each have a two-person base on the Moon The Americans have had to keep replacing their astronaut teams because they quickly go crazy; they have been using only male astronauts on the unspoken assumption that this would avoid any possibility of impropriety. The Russians, as godless Communists, are under no such constraints, and their male-female team has remained well-adjusted At the start of the film, a male and female American astronaut team is sent up to replace the sex-starved all-male team. The government insists on them being married first to preserve morality. Most of the story revolves around the eventual consummation of this marriage of convenience, and around their relationship with their Russian neighbors, who keep casually dropping by.

Movie quotes from Way… Way Out

[First lines]
Narrator: This is Colonel John “Shorty” Powers in Lunar Launch Control. This story takes place near the turn of the century -not the last century, the *next* century. Nothing very much has happened since the 1960’s: There as still a United Nations, and peace in the world… or at least what we have come to accept as “peace”.

Ponsonby: I’m afraid the fertilizer has hit the ventilator sir!

[loading the sex-crazed Schmidlap onto the return vessel]
Pete Mattemore (Jerry Lewis): When do you untie him?
Hoffman (Dennis Weaver): When I rendezvous with Deuce in the main ship, and get some help.
Schmidlap (Howard Morris): NOTHIN’S gonna help ya Hoffman! You no good dir…
[Hoffman yanks the cord on Schmidlap’s suit radio. Schmidlap continues shouting in silence, until quieted by a few blows by Hoffman to the side of his helmet]
Pete Mattemore (Jerry Lewis): What happens when Schmidlap gets back, and there’s girls all over the place?
Hoffman (Dennis Weaver): Oh I don’t know… I honestly don’t know… If I could just get him to go back to Divinity school…

Pete Mattemore (Jerry Lewis): You know what the problem with you is, honey? You say “no” before anyone asks the question!

Anna (Anita Ekberg):  It’s Igor! I knew he couldn’t sleep without me.
Pete Mattemore (Jerry Lewis): I can’t say I blame him.

Igor (Dick Shawn): Don’t drink vodka with funnel! What is wrong with you?

Trivia for Way… Way Out

Three on a Couch