Laughing Graving is a short Laurel and Hardy film that deals with Stan Laurel and Oliver Hardy trying to hide the existence of their dog, (whose screen name was the same as his real name, Laughing Gravy – hence the name of the movie) – and failing miserably.  The movie begins with Stan and Ollie in bed, when Stan’s snoring wakes up Ollie.  Oliver, after suffering in silence for a few moments wakes up Stan. 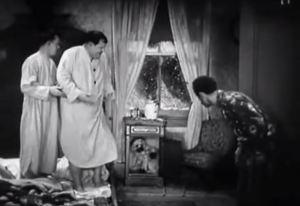 Stan, in a very clownish way, drinks a glass of water and tries to go back to sleep.  Only to wake up the dog, whose barking rouses their landlord, played by Roach Studios regular Charlie Hall.  The landlord throws the dog out, and Stan decides that he’s going to rescue his dog.  Ollie insists on doing it, however, since Stan will wake up the landlord.  Ollie succeeds in finding Laughing Gravy, only to be locked out of the building.  This basic scenario is repeated several times, resulting in Ollie falling into a frozen barrel of rainwater, locking himself out of the apartment window, climbing down (and destroying) the brick chimney, etc.

Eventually, the boys are going to be thrown out of the apartment (after having driven their poor landlord to the point of distraction), when the movie takes a very unexpected turn.  Stan receives a letter, informing him that he’s inherited $1,000.00 U.S. dollars.  This was a fortune in 1931.  On the condition that he breaks off all contact with Oliver Hardy.  At first, Stan doesn’t show Ollie the letter.  Until Oliver, in a very funny extended scene “guilts” Stan into sharing the letter.   With Oliver’s blessing, Stan prepares to leave forever.  At the last moment, however, Stan tears up the letter and returns to Oliver.  Puffed up, Oliver thinks that Stan gave up the money for him.  Only to have Stan tell him that he did it for his dog!

The short film ends with Stan and Ollie about to be thrown out by their landlord, only to get a reprieve.  The entire house has been quarantined for two months, and nobody can leave for that time.  The suffering landlord, unable to take that, picks up a rifle and walks off stage.  And the audience hears a shot.

Laughing Gravy is a very funny short film, which I recommend highly.  I rate it 4 clowns out of 5.