Love, Groucho: Letters From Groucho Marx To His Daughter Miriam 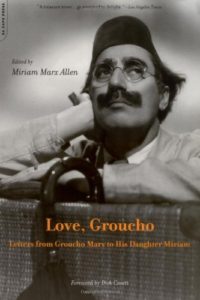 Description of  Love, Groucho: Letters From Groucho Marx To His Daughter Miriam

For everyone who still can’t get enough of this legendary wit (and excellent writer), here is an extraordinary collection of almost two hundred letters by Groucho Marx. Following a close filial relationship as it unfolds week by week, year by year, these letters move through three decades of life: from the vagaries of Groucho’s career in film, radio, and television, through two divorces and two remarriages, to Miriam’s own often tumultuous young adulthood.

In his own inimitable fashion, Groucho advises his daughter about her schoolwork, writing, career, growing up, and growing old. He also discusses theater, film, books, and politics with a candor that will surprise and delight even his most knowledgeable fans. Accompanied by photographs from Miriam’s personal albums,  Love, Groucho reveals a man deeply concerned with his family, a sometimes firm, always loving father who never hesitated to say exactly what he thought.

Groucho Marx and Other Short Stories and Tall Tales