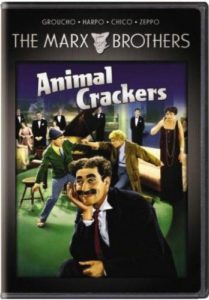 Released in 1930, Animal Crackers is the Marx Brothers‘ second film.  It’s full of the manic energy for which Groucho Marx, Chico, and Harpo are known. In addition, Zeppo also excels in this film, acting as the secretary for Groucho, aka. Captain Spaulding, famous African explorer. One of the film’s songs, Hooray for Captain Spaulding, became Groucho’s trademark.

In a nutshell, the Marx Brothers become involved in a high society party, where a theft occurs.  Leaving them embroiled in finding the crook and clearing their names.  Highlights of the film include:

Since it’s chock-full of their famous verbal humor, be sure to read funny movie quotes from Animal Crackers.

This movie is available as part of The Marx Brothers Silver Screen Collection.

This second Marx Brothers classic has Groucho playing Captain Spaulding (an inside joke pertaining to a renowned Hollywood drug pusher), whose song Hooray for Captain Spaulding became his signature anthem. Despite its staginess, it has some hilarious gags as the boys try to solve the mystery of a stolen painting among the high-society crowd. Some of the highlights include Groucho’s African lecture about shooting an elephant in his pajamas, and a wacky card game between Harpo, Chico, and the always-gullible Margaret Dumont. The musical interludes here don’t seem as awkward as in later films. It’s really quite charming watching Chico and Harpo show off their graceful talents. Bill Desowitz 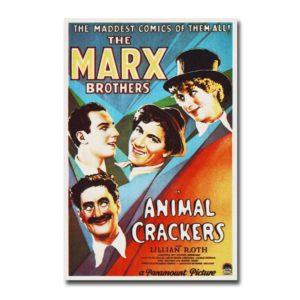 Description of The Marx Brothers’ Animal Crackers (courtesy of Amazon.com)

In this Marx Brothers comedy often regarded as their most quoted film for its witty and unforgettable dialogue Groucho stars as Captain Spaulding, a famed African explorer who is being honored at a high society party at the estate of Mrs. Rittenhouse (Margaret Dumont). Mayhem and chaos ensue after a valuable painting disappears and Spaulding, along with the Professor (Harpo), Signore Emanuel Ravelli (Chico) and Horatio (Zeppo) help search for it. Filled with comedy sketches and musical numbers, this classic comedy earned a place on AFI’s 100 Years 100 Movie Quotes list.

Monkey Business: The Lives and Legends of the Marx Brothers

A Night at the Opera, starring the Marx Brothers