The Cocoanuts, starring the Marx Brothers

The Cocoanuts was the first movie filmed by the Marx Brothers, and remains one of their funniest. It features the Marx Brothers in the roles that they soon made famous –   Groucho, with the greasepaint mustache, master of the fast wisecrack;  Chico, the vaguely-Italian pianist who constantly looking to con someone;  Harpo, who never speaks, but is the master of outrageous comedy and pantomime; and Zeppo, the handsome straight man. 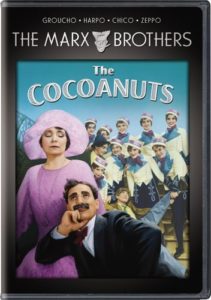 Margaret Dumont, Groucho’s perennial foil, appears in this first film as well. There is a plot to the movie, dealing with Groucho trying to flim-flam everyone possible in a land swindle.  But that’s frankly of secondary concern to the antics of the Marx Brothers.

One thing to bear in mind is that this is one of the first “speaking” movies – the sound quality reflects that, as does the music by  Irving Berlin.

Verbal comedy is one of the signature traits of the Marx Brothers – check out their funny movie quotes from The Cocoanuts.

Trivia about the Marx Brothers’ The Cocoanuts:

Editorial Review of The Cocoanuts (courtesy of Amazon.com)

Hello, I Must Be Going