What is Easter? A free clown skit for three speaking clowns, and one “normal” person

(Editor’s note: this skit is written by Raynbow the Clown, and is based on the joke “Three clowns at the gates of heaven.” Also note that it could be easily re-written for one clown, who is given three tries to get the answer right.)

The skit begins with the “normal” person (probably a children’s pastor) asking for volunteers from the audience to answer a simple question.  The three clowns leap up and clownishly race to the front, eager to answer.
Pastor: Well, here are three volunteers.  Are you ready to answer a simple question?
Clowns (in unison): We’re simple!
Pastor: I … see.  Alright, we’ll ask the question, and see who can get it right.  (Pastor addresses the first clown) What is Easter? 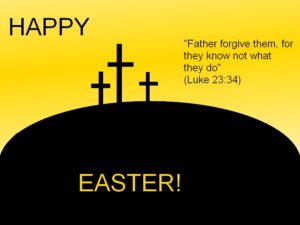 Clown 1: Oh, that’s easy, it’s the holiday in November when everybody gets together, eats turkey, and is thankful…
Pastor: No, that’s not right.  You’re thinking of “Thanksgiving.” (Clown 1 reacts, slapping himself on the forehead, or whatever clownish bit you care to use.  Pastor addresses the 2nd clown) What is Easter?
Clown 2: Easter is the holiday in December when we put up a nice tree, exchange presents, and celebrate the birth of Jesus.
Pastor: (reacts) No, that’s not right.  You’re thinking of Christmas, where we celebrate the birth of Jesus.  (Clown 2 reacts to his failure, Pastor turns to Clown 3) What is Easter?

Clown 3: (smiles and looks the Pastor in the eye) I know what Easter is. Easter is the Christian holiday that coincides with the Jewish celebration of Passover. Jesus and his disciples were eating at the last supper and He was later betrayed and turned over to the Romans by one of His disciples. The Romans took Him to be crucified and was stabbed in the side, made Him wear a crown of thorns, and He was hung on a cross. He was buried in a nearby cave which was sealed off by a large boulder. Every year the boulder is moved aside so that Jesus can come out, and if He sees his shadow there will be six more weeks of winter.
Pastor: No, no, no.  (Clowns step backward, and the Pastor then proceeds to explain what Easter/Resurrection Sunday is all about)

Thou Shalt Not Covenant (clown ministry)