The Family Jewels is actually one of my favorite Jerry Lewis films.   The basic plot is that a young rich girl, Donna, has been orphaned.  While being protected by the family chauffeur  Willard (played by Jerry Lewis) who has been looking over her since infancy, she has to visit six of her seven uncles, in order to choose which uncle she wants to become her legal guardian.

The seventh uncle is a career criminal, who is believed to be deceased; that belief is wrong, however, and 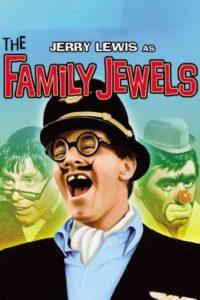 Uncle Bugsy ineptly tries to kidnap Donna multiple times.   In addition to playing Willard, Jerry Lewis plays all seven uncles, allowing him to re-use some of his favorite characters.   The professional photographer uncle, for instance, is the Julius Kelp character from The Nutty Professor.   Six of the uncles are typical clowns, and each visit (even the eventually successful kidnapping by Uncle Bugsy) is very funny.  Ironically, the seventh uncle is in clown makeup but is no clown.   Jerry Lewis portrays here his dramatic acting ability and creates a character that, within moments, the audience despises.  And he plays a very important part in the final choice, which I have to admit caught me by surprise the first time that I saw it.

There are also several other actors that people will recognize, such as Neil Hamilton (Commissioner Gordon from the “Batman” TV series) as one of Donna’s attorneys, and Sebastian Cabot, playing a Dr. Watson-style character, Dr. Matson, to Jerry Lewis’ Sherlock Holmes-style character of Uncle Skylock – and very funny, with a dry humor.
It’s an excellent movie, and I recommend it highly.