I recently watched  Jour de fete  starring Jacques Tati, courtesy of  TCM.   I had heard of Jacques Tati, who people compare favorably with Charlie Chaplin and Buster Keaton, but I’d never seen any of his films previously.    Jour de fete was Jacques Tati’s first feature-length film, an expanded version of one of his short films.   In a nutshell, a small carnival is coming to a small French village in the years after World War II; one of the attractions is a documentary film about the American postal service’s efficiency, which results in some good-natured joking with the local postal worker, played by Jacques Tati, who then tries to emulate American efficiency.  With some humorous, inefficient results. END_OF_DOCUMENT_TOKEN_TO_BE_REPLACED

I have to say that I was pleasantly surprised by Harold Lloyd’s Dr. Jack.  I’m not a huge fan of Harold Lloyd, but I truly enjoyed Dr. Jack.  The basic plot deals with the Sick-Little-Well-Girl (played by Harold Lloyd’s future wife, Mildred Davis).  She’s been under the care of an unscrupulous doctor, who keeps her medicated, in the dark (literally) and away from song and laughter.  Feeding her father’s fear of the slightest sniffle, and charging him exorbitant fees.  The family lawyer doesn’t trust the doctor, and suggests to the father that he bring in another doctor to consult.

At the same time, the audience is being introduced to Dr. Jack (Harold Lloyd), a poor but beloved country doctor, who dashes out on a medical emergency — “Mary’s dying!”  This leads to several very funny comic scenes on the way, as he leaves his car running in a circle on his front lawn while he dashes into his house to get his medical bag, moves cows out of the way while the car is running behind them, and being pulled over by a motorcycle cop (who merely wants to give him the remainder of his breakfast that his housekeeper has packed for him).  His car overheats on the way, and he falls off the police officer’s motorcycle, borrows a bicycle and falls off that, and runs the rest of the way.  Only to find out that “Mary” is a young girl’s doll, who’s fallen into their well. END_OF_DOCUMENT_TOKEN_TO_BE_REPLACED

Get Out and Get Under – Harold Lloyd

Get Out and Get Under  (1920), starring Harold Lloyd, Mildred Davis

Get Out and Get Under is a Harold Lloyd silent film comedy with a very basic plot.  The Boy (Harold Lloyd) oversleeps, and must get to the home of The Girl (Mildred Davis) to put on an amateur theatrical production before his rival can take his place.  But he runs into one problem after another on his way there.    Get Out and Get Under is a very funny film, and served as my introduction to Harold Lloyd.  I knew that he was renowned for his dangerous, physical comedy.  There’s plenty of room for that here, with his misbehaving vehicle.  But I’d never actually watched a Harold Lloyd comedy before.   END_OF_DOCUMENT_TOKEN_TO_BE_REPLACED The Harold Lloyd Comedy Collection boxed set is the definitive account of one of the silent cinema’s greatest comedians–and for a time, its most popular star. The seven discs included in this three-volume set have virtually all of Lloyd’s 1920s features, most of his talking pictures, and a healthy collection of shorts. Because Lloyd–a canny businessman–retained control over much of his output, the films have remained under his (and his estate’s) control through the decades, and the quality of the key titles is generally excellent. END_OF_DOCUMENT_TOKEN_TO_BE_REPLACED

n  The Freshman,  Harold Lloyd plays the role of Harold (Speedy) Lamb, a starry-eyed college freshman, who’s been dreaming of becoming a “big man on campus”, imitating his college football player idol all the way down to imitating a (silly) jig that he does before shaking someone’s hand.   Once he’s at college, his over-eagerness makes him an object of ridicule by many, but his determination compensates.  For example,  Harold Lloyd thinks he’s made the college football team, when at first the coach is simply using him as a tackling dummy  (a very funny scene), and later as the waterboy. END_OF_DOCUMENT_TOKEN_TO_BE_REPLACED
Continue Reading

The Cats-Paw is a very different Harold Lloyd movie; however, it’s also a very funny movie, and one that I enjoyed very much.

Very different from his roles up to this point,  Harold Lloyd plays the part of Ezekiel Cobb, a naive young man who’s been raised in China by his missionary parents.   He returns to the United States to seek a wife –  much of the humor in the early part of the movie deals with the ‘fish out of water’ nature of his character, as contemporary American slang is a foreign language to him.   Along the say, he is enlisted by the corrupt political machine of the fictional city of Stockport, led by the corrupt Jake Mayo (played by George Barbier) to run as the ‘reform’ candidate, where he’s expected to be the “cats paw” of the party leadership – and expected to lose.    Unexpectedly, he wins and starts a campaign to live up to his promise to clean up the town of the corrupt political machine that runs things behind the scenes. END_OF_DOCUMENT_TOKEN_TO_BE_REPLACED 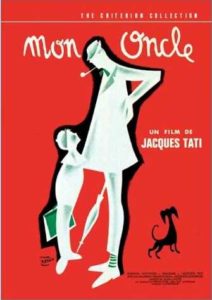 Mon Oncle  is a comedy by Jacques Tati, starring his clown character M. Hulot.   Set in France, there is very little dialog, removing the problem of any language barrier for those of us who aren’t fluent in French.    Mon Oncle  is a satire on modern life, contrasting the strict, sterile “modern” life with the older, slower lifestyle.   It also provides a vehicle for M. Hulot to work his comedy magic in; it’s a different style of comedy, taking time to set the scene and characters in order to amplify the (visual) punchline. END_OF_DOCUMENT_TOKEN_TO_BE_REPLACED 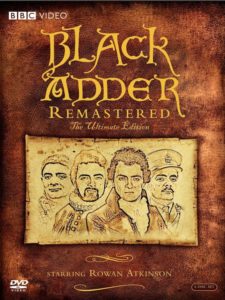 One of the best comedy series ever to emerge from England,  Black Adder  traces the deeply cynical and self-serving lineage of  various Edmund Blackadders  from the muck of the Middle Ages to the frontline of World War I. In his  pre-Bean  triumph, British comic actor  Rowan Atkinson  played all five versions of Edmund, beginning with the villainous and  cowardly Duke of Edinburgh, whose scheming mind and awful haircut seem to stand him in good stead to become the next Archbishop of Canterbury–a deadly occupation if ever there was one. END_OF_DOCUMENT_TOKEN_TO_BE_REPLACED 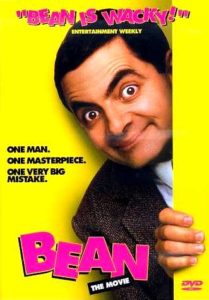 In Bean, Rowan Atkinson’s clown character Mr. Bean plays the part of a sleepy watchman at an art museum, who is sent to America to watch the famous painting, Whistler’s Mother. The reason they sent them is because of his constant causing trouble without trying. Once in America, he does the same with the “foster family” that he’s staying with and inadvertently destroys a work of art …

Frankly, I was pleasantly surprised with Bean since Rowan Atkinson’s Mr. Bean character is typically doing short comedy sketches, and I was afraid that he wouldn’t work well in a longer setting. Thankfully, it does work, to no small degree to the work of Peter MacNicol. He and Bean work well, as an oddball comedy team, with the “normal” art expert (MacNicol) at first awed by the “foreign expert” (Atkinson), only to switch roles when MacNicol realizes that Bean is no eccentric expert. It’s a very funny comedy, with lots of slapstick grounded in a loving, not quite dysfunctional family.

Editorial Review of  Bean the Movie  courtesy of  Amazon.com

Translating  Rowan Atkinson‘s Mr. Bean character from British television to the big screen takes a bit of a toll, but there are some hilarious sequences in this popular comedy. Bean, a boy-man twit with a knack for getting into difficult binds (and then making them worse and worse and worse), is a London museum guard who is sent to Los Angeles in the company of the famous painting Whistler’s Mother. He’s mistaken as an art expert by the well-meaning curator (Peter MacNicol) of an L.A. museum, but Bean’s famously eccentric behavior soon causes the poor guy to almost lose his family and job. The insularity of Bean’s TV world is sacrificed in this film, and that change diminishes some of the character’s appeal. But Atkinson is a man naturally full of comedy, and he doesn’t let his fans down. —Tom Keogh END_OF_DOCUMENT_TOKEN_TO_BE_REPLACED

The Best of Victor Borge 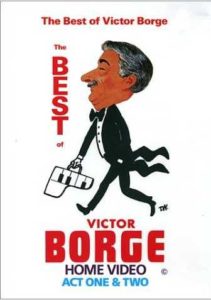 Victor Borge is one of the great clowns.   Granted, he never wore clown makeup, nor a clown suit, but his approach to performance was that of a clown.   He approached the world with a clown’s eye, such as when he would attempt to play music that was upside down or doing his “counting” routine.   He was one of the “laugh out loud” funny performers, that the world needs more of.   When it came to playing his music, however, he was serious about his art.   He would bring me from laughing out loud with tears running down my face, to listening with rapt attention to his playing of classical music.   Victor Borge is gone now, but thankfully we have recordings of his work, including this recording of a live performance, which has some of his best moments, and strongly recommended. END_OF_DOCUMENT_TOKEN_TO_BE_REPLACED