Be A Clown! – The Complete Guide to Instant Clowning by Turk Pipkin 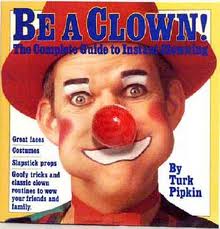 (Editor’s note: this book should not be confused with the children’s book “Be A Clown” nor Mark Stolzenberg’s Be A Clown, and has no relation to Cole Porter’s classic song “Be A Clown”)

A very nice book – light and lively, easily read, many photos, with a good insight into the mind & heart of a clown. This lively, humorous handbook covers all aspects of clownmanship, including makeup, funny faces, costume (including inexpensive clown-size shoes), and props (including a favorite Red Skelton routine, the Bouncing Hankie). Encourages the reader to create a clown persona with many photos and suggestions. Several getting-started routines are included. Develop your own oddball walk, swallow chair legs — you’ll always have a stunt up your sleeve. Written by the towering Turk Pipkin, a 6′ 7″ professional clown.

Includes plastic clown nose (OK for starting, but you’ll want to get a “real” nose). The more I read it, the more I like it.

Table of Contents for Be A Clown! The Complete Guide to Instant Clowning

A very good introduction to the book, and to clowning in general. Italicized entries are sidebars or pull-outs, discussing something of interest, typically a clown bit, skit, or piece of advice — in this instance, the classic balancing a (ping pong ball, feather, cup, etc.) on your clown nose.

Ring One: Get Ready

To Speak or Not To Speak

Will your clown speak, or be silent? Discussing the pros and cons of each, as well as non-verbal communication, which is vital for both styles of clowning. As an aside, I love the Flea Circus skit! You can see a version of that on film in Charlie Chaplin‘s Limelight.

Central to your clown character, discussing your costume. He begins with hats, which many clowns use — but as he says in Suited to You, if it doesn’t fit your character, don’t use it! You can see the Spring-loaded Hat Trick to the right. He also discusses some inexpensive (and creative) ways to get some clown shoes that match your character.

Something overlooked by a lot of introductory clowning books is the walk, or posture, of a clown. Remember Groucho Marx? You should. Remember the distinctive walk of Carol Burnett’s ‘Mrs. H-Whiggins’?

Using a minimalist, everyman style of make-up. If that works for you, wonderful! If not, feel free to consult a different book, such as Strutter’s Complete Guide to Clown Make-Up.

The essential part of clowning — how to think like a clown.

A very basic introduction to some of the better-known skills your clown might use, but covering the basics. And the classic Boxing Sketch does a good job of demonstrating how to do slapstick safely and properly.

I have to admit, I’m a big fan of audience participation sketches. And a much bigger fan of the Parade of Elephants after seeing it done live at Clown Camp 1998 by Brenda Ahern — it works, and it’s hilarious!

Appendix: Sweeping Up The Sawdust

Be a Clown – song lyrics

Be a Clown! by Mark Stolzenberg