Better known to millions of viewers as the original Captain Kangaroo, Long Island native Bob Keeshan first came to national prominence as Clarabell the Clown on the Howdy Doody TV show (1947 – 1952). Bob was born in Long Island, but moved to Forest Hills, NY shortly after his birth. He had a happy childhood, living with his immigrant father, mother, younger sister and two older brothers. His mother died when Bob was only 15, and this deeply impacted him.

Without the influence of a school guidance counselor, Bob would have stayed mired in his grief. Instead, in his 18th year, he began working for NBC in their page program. A page was a low-level gopher, giving an individual an “in” at NBC, and giving them time to find where, if anywhere, they belonged at NBC. Before Bob could discover this for himself, World War II interrupted. Shortly before his 18th birthday, Bob joined the Marines and underwent basic training. After the war ended, Bob returned to NBC to finish his time as a page, working for Bob Smith during the day, and attending college at night.  He was planning to become a lawyer.

Bob Smith was a popular radio personality of the day, doing both a program for adults and a morning program for children. With the advent of television, NBC asked him to copy his children’s program to a new TV show, Puppet Playhouse. Bob Keeshan followed along, having graduated from a page to a low-level employee at NBC, still working for Bob Smith.

Due to a blizzard, Keeshan missed the first filming of Puppet Playhouse — but most other people didn’t; the children’s show set viewership records, and was quickly expanded, and renamed after the lead puppet character — The Howdy Doody Show.

On Howdy Doody, Bob Keeshan’s tasks were initially fairly menial.  He handed out prizes to children (the “Peanut Gallery”), and quieted the youngsters when they weren’t supposed to be heard. However, a producer saw Keeshan on tape, and was upset at having a “normal” person on camera, since the show was supposedly a circus. So, it was shortly afterward that Bob Keeshan become a clown on camera for the first time. Accounts of the creation of the character differ, but what is not contested is that Bob Keeshan became Clarabell Hornblower.  A silent Auguste clown who communicated via twin bicycle horns mounted on a box.  And inside that box was a bottle of Seltzer water, that Clarabell was swift to use on numerous cast members.  Most commonly “Buffalo Bob” Smith, followed by a comedy chase through the studio. 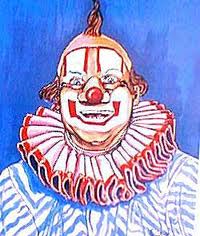 Bob Keeshan continued playing Clarabell until 1950, when he was fired — for the first time. Buffalo Bob Smith was a musically-inclined person, and wanted that for the Howdy Doody show as well — but Keeshan couldn’t play an instrument, and seemingly couldn’t learn. There were other reasons as well; some parents complained that the seltzer chases were getting the children too excited just before dinner — and Clarabell was the scapegoat. So, in June of 1950, Keeshan was fired, and a new Clarabell (Gil Lamb) was hired to replace him. This new Clarabell seemed to be everything that Bob Keeshan was not — theatrically trained, a dancer and a mime. His Clarabell was gentle and shy, where Keeshan’s Clarabell was aggressive and prone to misbehavior — the character of Bob Keeshan’s Clarabell was much like a petulant two-year-old child. 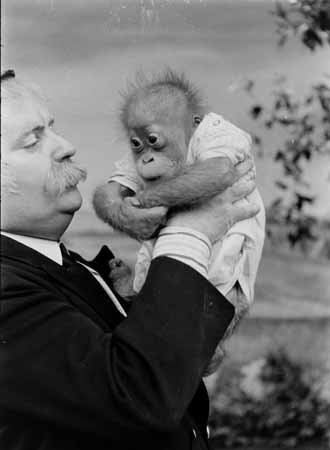 Numerous things combined to bring problems to a head – long hours (in addition to the show five days a week, there were numerous promotions to be done), work conditions, and the perception of low pay (although Bob Keeshan was receiving $600.00 per week at this time — a large sum for 1952). Along with three of his co-workers, Keeshan acquired an agent that represented all four of them — and all four of them were soon no longer employed by NBC. Accounts differ as to whether they quit or were fired, but in either event, Bob Keeshan was no longer Clarabell the clown — this time, he was successfully replaced in that role, and The Howdy Doody Show continued for several more years.

Several of his colleagues thought that this was the end of Bob Keeshan’s foray into television. After all, he couldn’t sing, play an instrument, was untrained, and really not qualified as an entertainer. They couldn’t have been more wrong.

Bob Keeshan had not been idle during his years working with Buffalo Bob Smith. Bob Keeshan is quoted saying the following in the book “Say Kids! What Time Is It?” (a biography of the Howdy Doody show, and highly recommended):

“I learned so much from Bob Smith. His sense of timing was awesome: I have that sense of timing now. He taught me things about timing, about putting a show together, back-timing a show — everything I used on  Captain Kangaroo. One of the reasons that Captain Kangaroo  was such a success is that it ran so smoothly, and that happened because I ran that show with all the talents that Bob Smith taught me. He is my father in the business. I give him one-hundred-percent credit for my success, because I would not be here today if I hadn’t learned all the technical aspects of the medium from him. I put what he taught me to work on Captain Kangaroo, and we ran for thirty years.”

His personal life had not been idle, either; he met and married his wife, Jean Laurie, in 1950. He now began working for his father-in-law, an undertaker, temporarily. But by August of 1953, Bob Keeshan was back on the air, doing a new children’s show.  It was Time for Fun, playing the role of Corny the Clown — a clown who spoke. Later that same year, in addition to Time for Fun, Bob began Tinker’s Workshop, a program aimed at preschoolers, where Bob played the grandfatherly Tinker.  This soon led to the most successful children’s program of all time, and the most popular character that Bob Keeshan ever created — Captain Kangaroo. 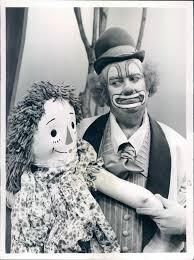 “Parents are the ultimate role models for children,” he said. “Every word, movement and action has an effect.  No other person or outside force has a greater influence on a child than the parent.”  When Fred Rogers, the gentle host of “Mister Rogers’ Neighborhood,” died last year, Keeshan recalled how they often spoke about the state of children’s programming.  ” I don’t think it’s any secret that Fred and I were not very happy with the way children’s television had gone,” Keeshan said.

In 1987, Keeshan and  Lamar Alexander (former Tennessee governor, currently a U.S. senator) co-founded  Corporate Family Solutions.  This is an organization that provided day-care programs to businesses around the country.

Bob Keeshan, for his portrayal of Clarabell the Clown, was inducted into the 1990 Clown Hall of Fame

Bob Keeshan died on Friday, January 23, 2004, after a long illness. Keeshan’s wife, Jeanne, died in 1990. He is survived by a son, two daughters and six grandchildren. Keeshan, who moved to Vermont in 1990, had remained active as a children’s advocate, writing books, lecturing and lobbying. He frequently criticized current children’s TV shows as too full of violence. And he spoke wherever he went about the importance of good parenting.