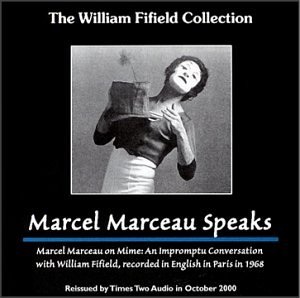 First issued by Caedmon Records in 1971, this conversation on mime, recorded by Marcel Marceau and the American writer William Fifield, is an in-depth look at Marceau’s art.

In this recording, Marcel Marceau traces the history of mime and discusses his own role in its renewed popularity. Calling mime the “art of making the invisible visible,” he shares how he developed his signature character, Bip, and began performing all around the world, a tour de force career that has lasted for more than 50 years. He speaks with eloquence about the purpose of his art, which, he says, is to show how life is. And branching off to his interests and experiences off the stage, he talks about his paintings, his belief in the universality of man, and his life during World War II, when he took part in the French Resistance and also had to hide from the Gestapo because his father was Jewish.

Digitally remastered, Marcel Marceau Speaks was released again in October 2000 by Times Two Audio, a division of the Times Two Publishing Company. The company is reissuing the books and recordings of William Fifield as part of The William Fifield Collection, a digital archive of the writerÃ¯ ¿ ½s work.

About the Artist – Marcel Marceau

Touching, graceful, and always striving for perfection in each of his performances, the incomparable Marcel MarceauÃ  has been a legend for more than 50 years. Born in 1923 in Strasbourg, France, he showed a flair for mime at an early age. After taking part in the French Resistance during World War II, he studied with the great mime teacher Etienne Decroux. In 1947, Marceau created Bip, his hapless and otherworldly hero–and with the birth of this everyman, whose humanity spoke to the soul of his audiences, Marcel Marceau attained worldwide success.

A novelist and O. Henry Award winner, William Fifield (1916-1987) also wrote nonfiction, including a biography of Modigliani, and published a series of conversations with Picasso, Cocteau, and other major twentieth-century artists and writers.

The purpose of Clown Ministry

Bip in a Book