The team of Martin & Lewis (Dean Martin and Jerry Lewis, of course) return to the screen in the sequel to their first film, My Friend Irma.This time, the ditzy blonde Irma (Marie Wilson) leads her roommate Jane Stacy (played by Diana Lynn), Jane’s fiancee Steve (Dean Martin), and her own boyfriend Seymour (Jerry Lewis) out west to try and break into the movies.  There’s a kidnapping plot and other things.  But the highlights of the film are Martin and Lewis recreating bits of their nightclub act.  Including bits like The Vagabond Song. 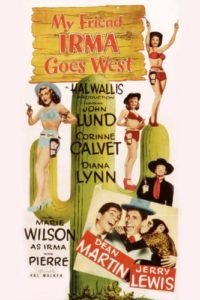 My Friend Irma Goes West picks up where My Friend Irma left off, with agent Al (John Lund) is still trying to promote Steve’s (Dean Martin) career. Eventually, Steve gets booked to a local TV station and is spotted by a movie producer. He is offered a contract and Steve, as well as the rest of the gang, Irma (Marie Wilson), Jane (Diana Lynn) and Seymour (Jerry Lewis), all head to Hollywood.

However, the trip ends in disaster when the “producer” is discovered to be an escaped lunatic. Al tries to set things straight by taking the gang to Las Vegas to work at a casino.  But things aren’t as they seem. Ditzy Irma causes trouble by wrecking a rigged roulette wheel.  She then gets kidnapped and held for ransom until Al can raise $50,000.

In the meantime, Seymour, dressed as an Indian brave, locates Irma and rescues her. The publicity received during the entire fiasco brings another movie offer… but this time for Irma and Seymour.