My Friend Irma was originally a long-running radio series.  It went on to become a pair of successful movies, the sequel being  My Friend Irma Goes West.   In this first film, the comedy team of Martin & Lewis were included as comedy relief.   However, much like Abbott and Costello‘s first movie role in One Night in the Tropics, Dean Martin and Jerry Lewis‘ roles were gradually expanded – not quite stealing the show, but coming close. 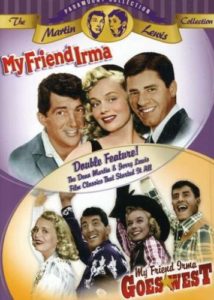 Based on the long-running radio show. Irma is a likable airhead who meddles in her roommate’s love life. Dean Martin and Jerry Lewis, in their first screen appearance, are juice-bar operators who are discovered when a self-proclaimed manager hears Martin’s golden voice. Irma’s roommate wants to marry her rich boss but instead falls in love with Martin.

Editorial review of My Friend Irma  courtesy of Amazon.com

One croons. The other cavorts. Fans couldn’t get enough of them! Dean Martin and Jerry Lewis made their crowd-pleasing film debuts in My Friend Irma, a 1949 funfest based on the long-running radio show. The guys are juice-bar operators who get a shot at new careers when a self-proclaimed manager discovers that Martin is better at squeezing out a musical “C” than Vitamin C. Their story intersects with the antics of Irma (Marie Wilson), the likable airhead who meddles in the romantic life of her roommate (Diana Lynn). Irma may be a queen of loopiness, but it’s Lewis who walks off as America’s clown prince. Exclaimed the Los Angeles Examiner: “There just hasn’t been anything like him on land, sea or celluloid.”

Songs performed in My Friend Irma