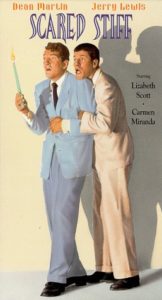 Scared Stiff is a remake of the Bob Hope and Paulette Goddard comedy, The Ghost Breakers, with Dean Martin as Larry Todd, a singer who is falsely accused of murder (“You murdered a perfect stranger?” “Nobody’s perfect.”). He is on the run from the law, accompanied by his friend Myron M. Mertz (played by Jerry Lewis).  On the lam, they run into Mary Caroll (Lizabeth Scott), who has inherited a haunted castle from her father, where the three of them go.  Once there the “ghost” makes his appearance, Dean sings, Jerry does slapstick — including an imitation of their co-star, Carmen Miranda. END_OF_DOCUMENT_TOKEN_TO_BE_REPLACED