“Silence is of the gods; only monkeys chatter.” I sat once in a famous theater in the London Haymarket, and heard that proverb drip from the oily tongue of an aged Chinese philosopher. It glittered for the moment on the surface of my mind and then sank into the depths; depths termed by a recently famous philosopher and theorist, the Unconscious. I sat, not very long ago, in Wonderful Harry’s restaurant, opposite the Metro Studio, in Hollywood, beside Buster Keaton, a recently famous comedian, and that proverb, lost for two years or more, rose again, uninvited, to the surface of my mind. If silence be of the gods, I thought, then Buster’s middle name is Zeus. 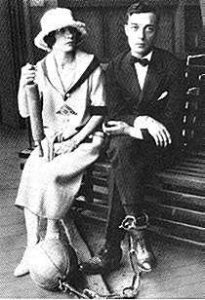 I had come to interview him upon his marriage with Natalie Talmadge, a marriage, then, of just three weeks’ duration. My first conclusion was that whatever else Natalie might suffer from, it would never be from “gab,” Buster simply hasn’t the gift. But there are certain limits overstepping which virtues suddenly find themselves vices. I’ve an idea that the gold of Buster’s silence would quickly turn to dross if, when he finally does open his lips, he didn’t inevitably spill wisdom, or something sounding so deceptively like it that the uncritical ear can accept it without question, and find sustenance in it of sufficient substance to carry it over the next impelling gap of silence.

I was introduced to Buster and he squeezed my hand, gentle enough. I was told to have a seat in Buster’s dressing room, and I took one. Buster concentrated his attention upon removing his make-up, allowing himself a furtive stare in my direction now and then, but saying nothing. I continued to sit. Three or four jovial henchmen then burst in to help create the confidential atmosphere so necessary to revelation of marital secrets. Buster continued to maintain his enormous silence, but he paused in his business of cleaning up to join in a jig, started by one of his jovial henchmen. He shuffled and jumped there, silently, his face never altering a hair’s breath from its habitual solemnity. It was grotesque. He might have been a marionette jerking on the end of his strings. But presently the three or four stout ones, hunger overcoming them, lumbered off in the direction of the restaurant. For the moment there was only Buster, his publicity man, and I.

“It’s too soon yet to say anything,” Buster’s voice coming so suddenly, seemed tremendous. “I’ve only been married three weeks.”

“Three weeks!” I murmured. “Where have I heard that before? It seems to recall tiger skins. And, yes, I believe that there was a lady, Elinor, who found that much could happen in three weeks.” I only murmured it, and Buster was concerned with the birth of an epigram. He finally delivered it.

From all of which it may be gathered that Buster is an old-fashioned husband. He has issued the pronunciamento that Natalie shall not work again before the camera; and Natalie probably won’t.

Buster is an individual. His silence, his solemnness, set him distinctly apart. I had been told that off the screen he was quite different, animated, smiling, even laughing, most of the time. He who told me had met him in the hospital where he was recovering from a broken leg. Perhaps it takes hospitals, or something equally as lugubrious, to make him laugh. He didn’t even grin that afternoon. His eyes have something of a basilisk quality about them, as much as brown eyes can. He keeps them half concealed under their lids, so that they seem expressionless. He is small but for all that an athlete. There seems to be no ill effect from his broken leg. He sustained it when a bit of revolving machinery on a complicated set went wrong.

His romance with Natalie Talmadge started five years ago. Despite the hints and rumors of possible disaster that immediately preceded the marriage –it was said that a rival for Natalie’s hand had appeared and threatened to oust Buster from her affection–there was never any question in Natalie’s mind. The only hope for the rival, a wealthy merchant, lay in his own mind. Natalie, when she was secretary for the Fatty Arbuckle company, out here in California, had admitted her love for Buster. Then he was playing in support of Fatty. They decided to wait, before committing themselves to any vows, until Buster had himself achieved his own company, and made it an assured success. He had accomplished that when he sent his famous wire to Palm Beach, Fla., asking Natalie to marry him. Her monosyllabic acceptance, just a plain “Yes,” was enough for Buster. As soon as his leg had mended so that he could hobble about with a stick, he took a train for the East.

One of the most interesting and least mentioned features of the Keaton- Talmadge marriage is that it completes what is perhaps the most powerful oligarchy in pictures today. There are Norma, Constance and Natalie. Norma is the wife of Joseph Schenck. Schenck’s influence is far more reaching than those unfamiliar with the film world ever dream. Norma is at the peak of her career now. Constance is still rising. Buster has just begun. They are all world-famous, all earners of fabulous salaries. It is quite certain that in aggregate wealth they outstrip even the famous Pickford-Fairbanks combine. It is doubtful whether they equal the former Pickford-Moore family, as it was before divorce and tragedy rent it asunder. That will probably stand for all time as the greatest combination in filmdom, both in aggregate earnings and world fame. Buster, who before his marriage was making comedies for the Metro Pictures Corporation, has now definitely aligned himself with his sisters-in- law, Norma and Constance, as a First National star. He has signed a contract which calls for eight pictures a year for a period of three years.

So far, though, it is quite true that only three weeks have elapsed at the time of this writing, the Keaton barque has traveled through quiet, untroubled waters. For the nonce, Buster and Natalie have come to anchor in a beautiful residence in Beverly Hills, which Buster had provided for his bride before he went East to fetch her. It is not a venturesome prediction to say that Buster’s phlegm will probably prove a worthy sea anchor through whatever storms the two may be destined to pass. Silence is like a rock. Rages break over it impotently. I’m not hinting, either, that Natalie’s rages are frequent. But she will be an unusual wife if she doesn’t have at least one. Between mouthfuls–we had long since followed the four jovial ones to the lunch table–Buster paused to remark solemnly:

“The marriage bond is like an elastic. You can stretch it a lot, but the one who stretches it too far always gets the snap-back.” And again: “Marriage–nothing can compare with it, not even the straight-jacket.”