Buster Keaton Can Smile and Yawn, Too, If He Wishes, by Gertrude Chase – originally published in the New York Telegraph on October 8, 1922

A small dark man stepped from the elevator at the Hotel Ambassador looking as solemn as an owl, which is the old-fashioned way of saying as solemn as Buster Keaton, for it was none other than the man without a smile. He followed us into the reception room and sat down with the deliberation of a patient setting himself in a dentist’s chair. Then he surprised us with a smile that would rank highly with any we have ever seen. “You really can smile,” we exclaimed, and realized at once that the remark was in the class with the one made upon meeting twins and saying, “How often you must be mistaken for each other.” Buster did not reply, he suppressed a yawn and taking our cure, we asked him about New York night life.

“Terrible,” he answered. “I haven’t missed a night at the theatre. Then there are the races and now the World Series, no wonder I’m under weight. We are seeing as many plays as we can with a view toward getting a new picture for Constance. The one I would like to see her do is ‘Kiki,’ but it may be hard to get.”

Mrs. Buster, Natalie, the youngest of the three Talmadges, it seems has no desire to go back into pictures. She is busy taking care of her four- months old son. Expressing a wish to see the baby, we were told that he was airing on Park Avenue and that we could find him when we went out.

“You can’t miss him, he looks just like me,” said the proud father. “He has a black buggy and a white nurse.”

The conversation turned to Buster Keaton’s own childhood when, as the little boy of the vaudeville act known as the “Three Keatons,” he kept the Gerry Society anxious because they couldn’t find a bruise on him, although he was tossed expertly about the stage in a way that made the audience hurt. 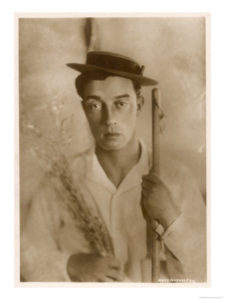 “I got so used to it that I took my clothes off every time I saw an officer. We had the roughest act on the boards and used to play at old Hammerstein’s so often that we kept a set of props there. By the way, how is Sam McKee, of the Telegraph? He used to be a great friend of ours.”

We told him of the funny little picture of him given us by Mr. McKee, showing him in the make-up of an old Irishman, the duplicate of that worn by his dad, and he laughed at the memory of his own quaint little figure. It was while playing vaudeville alone that he got his first opportunity to go into pictures. That was only five years ago and in that time they have become so popular that the time has come for Buster to be seen in a feature comedy, which he intends to start work on when he returns to California. Speaking of the material for his two-reel pictures, Keaton said that his scenarios were usually on postal cards.

“Ideas just come to us as we go along, for instance, in ‘The Boat’ I got the idea from an actual occurrence. The manager of a theatre on the old canal at Utica built himself a swell cruiser in the cellar of the theatre and had to knock out a side of the theatre to get it into the water. In comedy, like any other kind of picture, you have to do stuff that will be appreciated outside of New York and Chicago. In big cities the people are sophisticated enough to understand travesty and the more subtle bits of humor, but they don’t get over elsewhere. Comedy is best when it rouses the curiosity of the audience. As an example of the kind of thing I mean, take this situation. A man sees a pretty girl get into one of those ‘Old Mill’ boats in Coney Island. He gets in the same boat and it passes out of the picture, the action progresses with no sign of the boat for many feet of film, when it reappears the man has a black eye and other damages. It is simple, but there is nothing that requires more knowledge and has a greater number of rules or technical stunts than comedy slapstick or the other kind.”

Born and reared in his work, Buster Keaton gives you the impression of knowing it thoroughly from the ground up. He is becoming more in demand as a comedian every year, and if there is one thing the screen needs it is this kind of entertainment well done by people who understand it. In parting, we asked him if he had any statement to make to the great American public. To our surprise, he rose and said:

“I certainly have,” with all the conviction in the world. This was more than we had expected.

Low Comedy as a High Art