[Editor’s note: this is Stan Laurel’s eulogy, given by Dick Van Dyke at Stan’s funeral]

Thirty years ago, when the latest Laurel and Hardy movie played in my hometown in Illinois, I attended the Saturday matinees. That is to say, from about eleven A.M. to maybe nine or ten P.M.—or whenever my mother and father came to drag me home.

There are hundreds of millions of people all over the world who felt the pang of sorrow when Stan left us, and it’s impossible for anyone to speak for all of those people. All I can do is speak for myself and say how I felt about him.

Stan’s influence inspired me to go into show business in the first place, and his influence molded my point of view, my attitude about comedy. I had never met the man, but four years ago when I came to California I meant to meet Stan Laurel by hook or crook, and I wangled for a year, any way I could, to get his phone number, his address—anything that could put me in touch with him.

Do you know where I finally found it? In the phone book, in a West Los Angeles phone book: Stan Laurel, Ocean Avenue, Santa Monica. I picked up the phone and received an invitation to come up there and visit. 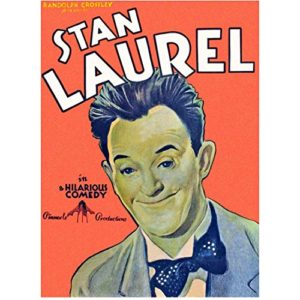 When Stan passed away, his little desk there was awash with fan mail that had been pouring in from all over the world, as it had been during most of his later life. He insisted on sitting there at that little portable typewriter and answering every one of them, personally, and of course he was so far back—months and months behind in the answering – but he wouldn’t give up.  He never gave up on anything; he never gave up on life, and most of all, he never gave up that God-given mirth that he had.

And that’s what put Stan Laurel head and shoulders above all the rest of them—as an artist, and as a man. He put into his work that one special ingredient. He was a master comedian and he was a master artist—but he put in that one ingredient that can only come from the human being, and that was love. Love for his work, love for life, love for his audience—and how he loved that public. They were never squares or jerks to Stan Laurel.

Stan was never really applauded for his art because he took too much care to hide it, to conceal the hours of hard creative work that went into his movies. He didn’t want you to see that—he just wanted you to laugh, and you did!

He didn’t want you to see that—he just wanted you to laugh, and you did!

You could never get him to pontificate about comedy. He was asked thousands of times, all through his life, to analyze comedy.

“What’s funny?” he was always asked, and he always said: “How do I know? Can you analyze it? Can anybody? All I know is just how to make people laugh.” 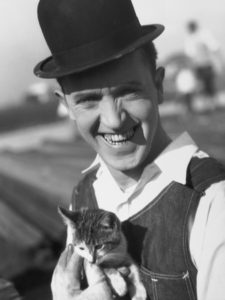 That’s all he knew!

Stan always believed that no comedy could depend merely on the spoken word, and all over the world, millions of people have laughed at Stan, who never understood one word he ever said. His sense of humor was clean and it was kind. The worst things that ever happened in a Laurel and Hardy movie happened to Stan Laurel.

Stan was the creative one of the team, and the Babe liked that very much. His leisure hours were spent on the golf course. He was an easy-going, extroverted, happy man, and that was the way Ollie liked it. Stan found his fulfillment in the free hours that he spent at the studio—he loved working on new gags, on new ideas for comedy. Comedy was his whole life. Ollie had one well-known answer when anybody asked him about any of their current projects. He always said: “Ask Stan.”

And that’s a piece of advice that was still being taken during the last few years by every great comedian in the country, and all the other countries around the world. They all came to “ask Stan.” That living room in that small apartment had been graced in the last few years by Jerry Lewis, Danny Kaye, Marcel Marceau, Red Skelton, and dozens and dozens of others who just came up to “ask Stan.” They all recognized him as the greatest of them all.

His sweetness to me, I’ll never forget. Stan didn’t let them down either when they went up there. He was just as aware of the world around him in 1965 as he was at any other time in his life, and he knew what was funny about it. And he could be the greatest today all over again.

I once tried to do an impression of Stan Laurel on my television show and I took meticulous care to get just the right kind of hat, the right kind of clothes, and to get everything down right. I put it on the air, and in a fever after the show, I called him up and said, “What did you think?”

He said, “It was just fine, Dicky, but ,” and for the next forty minutes, he gave me a list of details that I had done wrong.

He was a perfectionist. And then he just said, “God bless,” and hung up.

I wish I had a tape of that phone call: He said more things in there than I’ll ever learn about my business, or the importance of human beings being able to laugh at themselves. A man like Stan Laurel taught millions and millions of people to laugh at themselves. Somehow when we lose a great leader, a great scientist, a great teacher, there always seems to be somebody to take their place. But the loss that we had with a man like Stan Laurel is a deep one because there doesn’t seem to be anybody to take his place.

He won’t happen again because the world’s a different place now.

Three generations of people found his comedy equally human, warm, and funny through his films, which he never owned.

Maybe future generations will. But he will never happen again and the world seems to know it.

Telegrams and phone calls poured in from almost every country in the world, expressing love and affection and grief at the news that Stan Laurel had left us.

There were some strange places that Stan and Ollie went—they never took a vacation for a long time, but once they took a tourist vacation and went to China. They were in the deepest part of the interior of China and, as tourists, they visited a Buddhist temple there.

They were invited to come in and look at the altar, and there on the altar was a tremendous blowup in color of Ollie and Stan.

Once when they were in England, on a tour, they were surprised to find that wherever they went, they were mobbed by crowds of people. They didn’t realize how much everyone loved them so. They were hiding in Cobh, Ireland, to get some quiet, and suddenly the church bells of Cobh began to ring—playing “The Cuckoo Song.”

Stan said, “We both cried at that time, because of the love we felt coming from everyone.”

Stan spent the last years of his life with a serious illness. Those were years shared by his wonderful wife, Ida. She was the only one who really knew about the pain and suffering that was behind that famous smile, that wonderful high-pitched giggle he had. She shared his memories with him.

He has a daughter, Lois, and a son-in-law, Rand, and two grandchildren who had a better grandfather than Santa Claus could have been.

Stan and Ollie are both gone now, and I feel the halls of heaven must be ringing with divine laughter at that sweet pair.

A number of years ago I found a poem that I liked very much, and after I got to know Stan, I sent it to him a couple of Christmases ago as a card, and he called me and said how much he loved it and he was going to keep it. It’s called “A Prayer for Clowns?”

God bless all clowns.
Who star in the world with laughter,
Who ring the rafters with flying jest,
Who make the world spin merry on its way.

God bless all clowns.
So poor the world would be,
Lacking their piquant touch, hilarity,
The belly laughs, the ringing lovely.

I’d just like to say to Stan what he always said to all of us when we took his leave: God bless.