Beau Hunks begins with Oliver Hardy singing “The Ideal of My Dreams“, as Stan Laurel cuts an advertisement for fertilizer out of the newspaper and unintentionally cuts the fabric out of Oliver’s upholstery, exposing a spring, which causes Oliver to do massive damage to his room later.  First, however, Oliver is planning on marrying his sweetheart, “Jeanie Weanie”, who’s signed photograph he carries with him.  The mail comes, with a letter from Jeanie-Weanie, which Oliver is too upset to read, so Stan reads it to him – where Jeanie-Weanie, who has traveled all around the world, is breaking up with Oliver and never wants to see him again.  Broken-hearted, Oliver decides to “go where men go to forget” – the French Foreign Legion.  And he takes Stan along with him.

Once there, Oliver quickly realizes that Jeanie Weanie has, indeed been all over the world as his commanding officer, and all of his fellow legionnaires, have the exact same photograph! Since he’s now over Jeanie-Weanie, Oliver wants to leave, but their commanding officer lets them know in no uncertain terms that no one leaves the French Foreign Legion.  Instead, he orders their drill sergeant to drill them mercilessly.  The scene of the after effects of their drilling are truly hilarious, with Stan and Ollie turning something as mundane as taking off their boots and rubbing their feet into comedy gold. 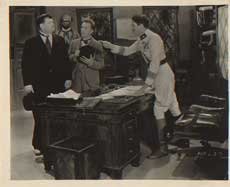 The plot gets slightly more complicated when the nearby Fort Arid sends a messenger begging for reinforcements before they are overrun by the desert rats, the Riffians.  The fort sends all of the reinforcements that they can spare, including Laurel and Hardy.  Marching there, Laurel and Hardy again turn something ordinary into a very funny moment, as Stan has the idea of putting his hat on backward, covering his face.  Why?  To keep the sun out of his eyes, of course!  Oliver thinks this is a brilliant idea and does the same.  Of course, they’re now marching blind and miss the turn that their group is taking, and full down a sand dune and knock over their leader.  Quickly getting back in line, the group is soon engulfed by a sandstorm. 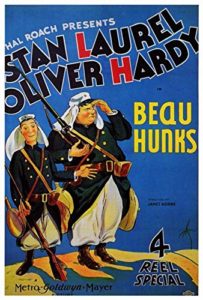 At Fort Arid, supplies are low and the enemies are increasing by the hour.  Desperately needing reinforcements, he injured commander of Fort Arid asks out loud, “Why don’t they come?” In answer, the audience hears the sound of the marching reinforcements approaching.  The doors to the fort open dramatically to show … Laurel and Hardy!  As Oliver explains, when the rest of the group got lost, he took command of what was left — Stanley — and marched to Fort Arid.  At that point, two guards are killed by the attackers, and Laurel and Hardy are ordered to take their place.

As Laurel and Hardy march on the parapets, the attackers sneak over the wall under their very noses — but they are stopped before they can let the other attackers in.  “Use the grenades! It’s our only chance!” says the commander of Fort Arid.  Stan and Ollie try to comply and empty out a crate of grenades with Ollie showing Stan how to use them.  Stan complies, pulls the pin out of the grenade, and throws the pin over the wall, discarding the live grenade into the pile of grenades. Ollie desperately tries to find the live grenade, and with Stan’s assistance actually finds it and throws it over the wall just it time, devastating the enemy forces.

One of them sneaks in a side door, however, and chase Stan and Ollie, who unintentionally find the key to defeating the enemy as they spill a barrel of tacks.  This causes the barefoot attacker to cry out in pain as the walks across them, allowing Laurel and Hardy to dispatch them.  Having a moment of brilliance, they scatter tacks across the entry way to the fort and then opening the doors, immobilizing all of the attackers as the enemy streams in, allowing the legionnaires to defeat them with ease, as the remaining reinforcements finally arrived in the nick of time.

At the very end, they capture the leader of the riff-raff, who, as Stan says “was trying to get away on his dormitory.” “Not, dormitory, dromedary!” corrects Oliver.  They’re ordered to disarm the prisoner, and in the process of frisking the prisoner, Stanley finds a photograph, that he tries in vain to hide from Oliver - another autographed picture of Jeanie-Weanie, made out to her “Sheiky-weaky.”

Beau Hunks is a classic Laurel and Hardy film, as well as a very funny one as well.  I rate it a solid 4 stars out of 5.

Ollie (Oliver Hardy): She’s the sweetest girl in the world, and she’s mine, all mine. Well, what do you think of it?
Stan (Stan Laurel): What does “levity” mean?

Commandant: You there, what is your number?
Stan (Stan Laurel): Hollywood-4368.