Men O’War is a Laurel and Hardy short film where Navy sailors Stan Laurel and Oliver Hardy are on shore leave, and try to pick up a pair of lovely young ladies, and treat them to sodas.  However, Stan only has 15 cents, leaving them 5 cents short (I’m resisting the urge to mention inflation here – back in 1929, that was the price of a soda).  Oliver decides at first that, in order to maintain their appearance, Stan will simply pretend not to be thirsty when they order.  However, Stan keeps forgetting and ordering a soda anyway, much to the annoyance of Ollie — and suffering soda jerk Jimmy Finlayson.  Eventually, the boys decide to split a soda — so Stan drinks the entire thing since his half was on the bottom. 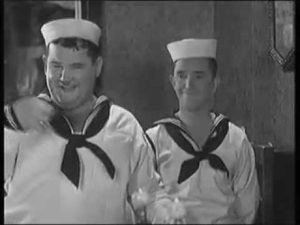 Receiving the bill for 30 cents, instead of the expected 15 cents, Oliver gets his revenge by walking off with the girls and leaving Stan to pay – but Stan’s luck holds out as he puts one of his coins in a nearby slot machine and wins the jackpot! With Stan’s winnings, the pair decides to rent a boat as well, taking the ladies on the lake, where they demonstrate their lack of nautical skills, ending with a fight between themselves and another boater, played by Laurel and Hardy regular Charlie Hall.  Soon, a slapstick fight breaks out, throwing water and flotation devices, soon knocking over other boaters, ending with everyone trying to board Laurel and Hardy’s rowboat, including Jimmy Finlayson and a police officer, resulting in the boat slowly sinking beneath the weight of the dozen or so people standing in it.

I enjoyed Men O’War, but I would describe it as one of Laurel and Hardy’s second-tier short films.  I rate it 3 stars out of 5.

Ollie (Oliver Hardy): [referring to the panties he has picked up] I’ll bet you miss them.
[giggles]
Girl: [referring to her lost gloves] You can just imagine! And I washed them with gasoline just this morning.