Way Out West is one of my favorite Laurel and Hardy films, for several reasons.  It moves at a good pace, with lots of comedy both verbal and slapstick.  The film’s musical numbers actually fit well in with the story and aren’t long enough to distract from the film.  There are several classic moments, including the famous “tickling scene” between Stan Laurel and Sharon Lynn, Stan and Ollie dancing to The Trail of the Lonesome Pine, Ollie forcing Stan to eat his hat, and Stan “lighting” his thumb.

Synopsis of Way Out West

Stan Laurel and Oliver Hardy go to the American West to deliver a recently-deceased prospector friend’s gold mine deed to the friend’s only child, a daughter named Mary Roberts (played by Rosina Lawrence), who’s in the care of saloon keeper Mickey Finn (played by Laurel and Hardy regular Jimmy Finlayson) and his wife Lola (played by Sharon Lynn).  However, the unscrupulous Finns manage to deceive the gullible Laurel and Hardy by having Lola impersonate Mary, and take the deed.  It’s then up to Stan and Ollie to make the best of a “ticklish” situation to try and “steal” the deed back and escape from town along with Mary before the Sheriff shoots them both on sight.

Editorial review of Way Out West, starring Laurel and Hardy, courtesy of Amazon.com

One of Laurel and Hardy’s greatest efforts in the full-length form. They play a pair of unlikely prospectors whose best pal has died, leaving the deed to a rich gold mine. It’s up to them to deliver the deed to his daughter. She, however, is a scullery maid in the saloon of unsavory Jimmy Finlayson, who tries to pass off his own wife as the grieving heiress. This film includes several classic moments, including a delightful song-and-dance by L&H and a struggle over the deed itself, in which Stanley is tickled nearly to death. Try to avoid laughing at Laurel’s infectious braying–it can’t be done. —Marshall Fine

Funny movie quotes from Laurel and Hardy’s Way Out West

Sheriff: There’s one thing in this here town we don’t allow! And that’s messing with our women. Now if you want to stay healthy, you’ll catch the next coach out of town.

Oliver Hardy: Yes, sir.
Sheriff: And if you miss the next coach,
[draws revolver]
Sheriff: you’ll be riding out of here in a hearse.
[Walks away]
Stan Laurel: Goodbye.
Oliver Hardy: Let well enough alone.

Patron: Hey Finn, you’re a lucky man to have a swell gal like that.

Mickey Finn (James Finlayson): Yeah I … What are you talking about? She’s the lucky one to have a swell guy like me! 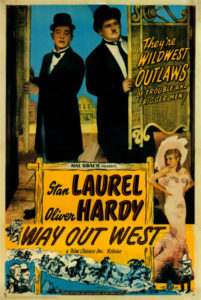 Mickey Finn (James Finlayson): [Every time Mickey pushes $1 on the bar’s cash register, the amount of $.10 comes up in the display; to bartender] Hey. This thing ain’t working right.
Bartender: It’s working all right for me.

Lola Marcel, the Singing Nightingale: Tell me about my dear, dear Daddy! Is it true that he’s dead?
Stan Laurel: We hope so, they buried him.

Lola Marcel: Tell, me, what did he die of?
Stan Laurel: I think he died of a Tuesday, or was it a Wednesday?

Stan Laurel: Now that you’ve got the mine, I’ll bet you’ll be a swell gold-digger.

Stan Laurel: We want to know why you’re not Mary Roberts!

Oliver Hardy: A lot of weather we’ve been having lately!

Oliver Hardy: This is another nice mess you’ve gotten me into!

Stan Laurel: That’s the first mistake we’ve made since that fellow sold us the Brooklyn Bridge.
Oliver Hardy: Buying that bridge was no mistake. That’s going to be worth a lot of money to us some day.

Stan Laurel: Do you mind if I have another idea?
Oliver Hardy: If it’s anything like the last one, yes.

Stan Laurel: Wait a minute, while I spit on me hands.

Oliver Hardy: We’ll all go down to Dixie. Oh, for a slice of possum and yam. Mm!
Stan Laurel: Yes sir, and some good old fish and chips. I can smell ’em.
Oliver Hardy: [disgusted] Fish and chips!

Trivia for Laurel and Hardy’s Way Out West