Sad to say, The Midnight Patrol was the first Laurel and Hardy movie that I’ve ever seen that I didn’t find very funny.  The basic plot has rookie policemen Stan Laurel and Oliver Hardy on patrol, who are notified by the police dispatcher that thieves are presently stealing their spare tire.  Shortly after, they are called to a possible burglary, but they miss the address, and Stan has accidentally cut the phone line at the call box, and so they try to find a place to use a phone to call in and get the address. 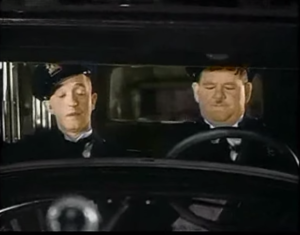 The funniest part of the movie comes next, as Stan walks into a jewelry store and interrupts a burglar trying to crack the safe — not realizing that the man’s a thief, and nearly helps him open “his” safe.  Oliver comes in, and they eventually ticket the man, trying to work his court appearance into his busy schedule.  Eventually, they make their way to the address – where it turns out that the homeowner, their own police chief, had simply locked himself out of his home, and now is safely inside.

This is where the movie slows down, as Stan and Ollie fail to enter the home to investigate and try to break in by various methods, including using a marble bench to break down the front door.  Resulting in Ollie falling into the fish pond.  Eventually, they make their way in, arrest the “burglar” and take him back to the station.  Once there, the other police officers (including Tiny Sandford) realize what happened, and the police chief takes a gun and fires two shots at the fleeing Laurel and Hardy, ending the short film.

So what’s wrong with The Midnight Patrol? The pace seems slow; oddly, the funniest moments occur by actors other than Laurel and Hardy, such as Charlie Hall as one of the tire thieves, the police chief firing at Laurel and Hardy, the negotiation with the safe cracker over when he can appear in court, etc.  This isn’t to say that the short film isn’t funny, but that it’s not nearly as funny as it could be.  I personally, was disappointed, and I don’t recommend The Midnight Patrol, except for the purpose of completeness.  I rate it 2 clowns out of 5.

Stanley (Stan Laurel): If you come back here again, I’ll arrest you!
Tire thief: [sarcastically] WHO will?
Stanley (Stan Laurel): I – –
[notices that he is one small slight-figured guy against two fairly big hefty guys]
Stanley (Stan Laurel): WE will!
[nods emphatically]
Tire thief’s partner: [cocks his leg arrogantly and puts his hand on his hip in a gesture of belligerent contempt] Oh – – is that SO?
Stanley (Stan Laurel): Yeah.
[grabs up a large rock that is sitting nearby, then flings it at the two vagabonds. They duck, and the rock sails past them and smashes the windscreen of their car, causing the convertible top to pop up. One of the ruffians immediately reaches into the car’s seat and grabs the rock from where it has landed, and Stan, seeing this, hurries back into the squad car and shuts the door. The ruffian hurls the rock back toward the squad car, and the rock smashes through the rear window, startling Ollie just as he is about to take a sip from a milk bottle. Ollie’s hand tightens convulsively around the bottle, causing the milk inside to come squirtng out the top of the bottle and spraying all over his face and head]