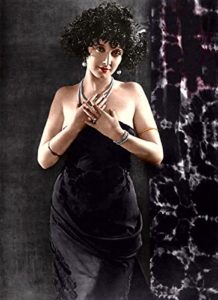 Mae Busch was an Australian-born film actress who worked in both silent and sound films in early Hollywood. During her career, Mae played Erich Von Stroheim’s mistress, Lon Chaney’s girlfriend, Charley Chase’s sister, James Finlayson‘s ex-wife and Oliver Hardy‘s wife. Born in Melbourne, Australia in 1891, her parents were both in the theater and when she was 9 years old the family moved to the United States. Mae’s home was a convent in New Jersey until she was 21 when in 1912 she left to move back to New York with her parents. She soon tried her hand at acting and in the same year appeared in her first film, The Agitator (1912).

One of her co-workers in New York, a young and not-yet-famous Mabel Normand, was heading to California to work with Mack Sennett and Keystone, so Mae went along.  She first appeared in films in The Agitator and The Water Nymph, both released in 1912. In 1915 she began working at Keystone Studios, where she appeared in comedy two-reelers. Her dalliance with studio chief Mack Sennett famously ended his engagement to actress Mabel Normand when Mabel Normand allegedly walked in on the pair. According to some accounts of the incident, Mae Busch inflicted a serious head injury on Mabel Normand by striking her with a vase (she was known for pinpoint throwing accuracy, which she put to good use in her slapstick comedies). 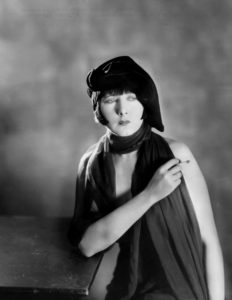 At the height of her film career, Mae Busch was known as the versatile vamp. She starred in such feature films as The Devil’s Pass Key (1920) and Foolish Wives (1923), both directed by Erich von Stroheim, and in The Unholy Three (1925), with Lon Chaney. Her career declined abruptly in 1926, when she walked out on her contract at Metro–Goldwyn–Mayer and suffered a nervous breakdown. Afterwards, she found herself working for less prestigious studios such as Gotham and Tiffany, and she was relegated mostly to supporting roles.

In 1927, she was offered a leading role in a Hal Roach two-reeler, Love ‘em and Weep, which began her long association with Laurel and Hardy. She appeared in thirteen of their comedies, the last being The Bohemian Girl, released in 1936. Her film roles after 1936 were often uncredited. Overall, she had roles in approximately one hundred and thirty motion pictures between 1912 and 1946.

Mae Busch died in 1946, age 54, at a San Fernando Valley sanitarium where she had been ill for five months from cancer. Her grave is located at Chapel of the Pines Crematory. For her contribution to the motion picture industry, Mae Busch has a star on the Hollywood Walk of Fame located at 7021 Hollywood Blvd.

“What became of my money? Well, I was not used to wealth when the studios began dumping it into my lap. The dollars slipped through my fingers like sand and went to pay for automobiles, houses and one great item clothing.”

Me and My Pal