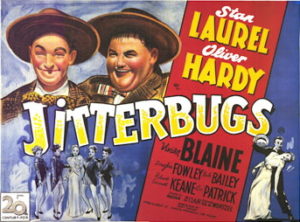 Jitterbugs is, hands down, one of the funniest Laurel and Hardy films that I’ve ever seen. The jitterbug ending, especially, is laugh out loud hilarious — literally. The movie begins with Stan Laurel and Oliver Hardy driving across the country as not-too-successful musicians, and are soon picked up by a likable con man (Bob Bailey) who uses the unwitting duo to sell his bogus “gas pill” (think free gasoline) at every stop — and soon have lots of dissatisfied people chasing them.

Along the way, the handsome, likable young con man falls in love with a pretty small-town girl (Vivian Blaine), whose mother has been swindled out of their home by real-estate swindlers Corcoran (Robert Emmett Keane) and Bennett (Douglas Fowley) — and since turnabout is fair play, the young con man decides to con the money back, in a funny scheme that has Oliver playing a southern gentleman, and Stan — in drag, despite his protests — as the gentleman’s Aunt Sally, who has money to be swindled.

Of course, no battle plan survives first contact with the enemy, and soon the boys are captured by the con man’s criminal friend Tony Queen (Noel Madison) and his gang … and escape, nearly despite their best efforts, due to those “gas pills” (not a cure for indigestion, as one of the criminals find out) and ends with a zany chase on an old-time showboat, and Stan and Ollie in the drink!

If Jitterbugs is, as has often been claimed, the best of Laurel & Hardy’s 20th Century-Fox films, it is because the studio was using the picture as a showcase for their newest singing discovery Vivian Blaine. Stan Laurel and Oliver Hardy play a couple of travelling ‘zoot suit’ musicians who innocently team up with likable con man Chester Wright (Bob Bailey). In the course of their travels, Chester and the boys meet small-town girl Susan Cowan (Blaine), whose mother has been victimized by real-estate swindlers Corcoran (Robert Emmett Keane) and Bennett (Douglas Fowley). Reasoning that it takes a crook to catch a crook, Chester masterminds a complicated ‘sting’ to recover Mrs. Cowan’s money.

Chester’s scheme requires Hardy to disguise himself as amorous Southern colonel Wattison Bixby, and obliges Laurel to don women’s clothing as Susan’s Aunt Emily. Alas, the boys aren’t quite up to the rigors of the confidence racket, and as result they end up the prisoners of Bennett’s partner, gangster Tony Queen (Noel Madison). In escaping their captors, Laurel and Hardy utilize Chester’s phony ‘gas pills’, which when swallowed cause the bad guys to float to the ceiling! The film concludes with a wild runaway-showboat sequence, consisting largely of stock footage from the 1938 Fox musical Sally, Irene and Mary. Worth the admission price in itself is the romantic rendezvous between Oliver Hardy and phony Southern belle Lee Patrick.