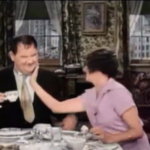 Their First Mistake is a very funny Laurel and Hardy short film, where Oliver Hardy‘s wife, played by Roach Studios regular Mae Busch, is upset that he’s spending all of his free time with his pal Stan Laurel, and none of it with her.  At that moment, Stan calls Oliver with an offer to go out that evening, and Oliver tries to cover by pretending that it’s his new boss, Mr. Jones, inviting him out for a meeting with some company bigwigs.  It backfires when Stanley comes in to explain that it wasn’t Mr. Jones on the telephone, it was him! A very funny scene, and one that’s stuck in my mind since I first saw it nearly 20 years ago. 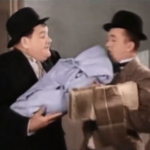 Stan comes up with the “brilliant” suggestion of the Hardys adopting a baby since that would give Mrs. Hardy “something to do” during the day.  Ollie thinks that’s a fine idea, and they go out and bring a newborn infant home.  Oh, if only adoption were so easy!  Once they return to Oliver’s apartment, his wife is missing; the mystery is solved when a process server, played by Billy Gilbert, serves Oliver with divorce papers – and she’s suing Stanley as well, for alienating Oliver’s affections.  The next part is hilariously funny, and as pertinent today as when it was filmed; Stanley is going to leave, and Oliver plays the part of the “abandoned mother”: 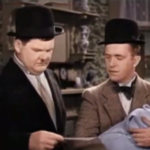 As they say, everything old is new again.  Having no choice, the two try to take care of the now-crying baby, with their efforts to keep quiet hilariously failing.  Eventually, the trio falls asleep, and when the baby starts crying, the sleepy Oliver tries to give him a bottle, only to give it to Stanley instead.

It’s a very funny short film, and I rate it 4 clowns out of 5. I hope you enjoy it as much as I did.

Funny movie quotes from Laurel and Hardy’s Their First Mistake

Stanley (Stan Laurel): I’m not as dumb as you look.

Oliver (Oliver Hardy): What are you putting that cotton in your ears for?
Stanley (Stan Laurel): If I make a noise, I won’t be able to hear it.

Oliver (Oliver Hardy): What did you strike that match for?
Stanley (Stan Laurel): I wanted to see if the light switch was off.

Stanley (Stan Laurel): You woke the baby up.