Oliver Hardy biography – Laurel and Hardy – another fine mess you’ve gotten me into!

On January 18, 1892, Norvell Hardy was born in Harlem, Georgia. It wasn’t until many years later that he adopted his father’s name, Oliver, as his own.  A tribute to the father that he never knew. His father was not a healthy man, and he died less than a year after Norvell’s birth. His mother, Emily, was left to provide for five children. She worked as a hotel manager first in Madison and later in Milledgeville, Georgia. 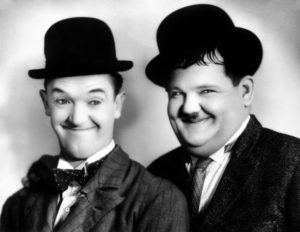 Young Norvell was not an easy child to raise. He was not interested in education, although he acquired an early interest in music and theater, possibly from his mother’s tenants. He ran away from home to join a theatrical group and later ran away from a boarding school near Atlanta. His mother recognized his talent for singing and sent him to Atlanta to study music and voice with a prominent musician, but Norvell skipped his lessons to sing in a vaudeville house. He was sent to a military college, but ran away from there, also. After toying with college and the idea of studying law, he decided to follow his dream of a singing career.

Oliver Hardy At the Movies

In 1910, a  movie theater opened in the future Oliver Hardy’s home town of Milledgeville, and Oliver became the projectionist, ticket taker, janitor, and manager. He soon became obsessed with the new motion picture industry and became convinced that he could do a better job than the actors he saw on the screen. A friend suggested that he move to Jacksonville where some films were being made. In 1913 he did just that, where he worked as a cabaret and vaudeville singer at night, and at the Lubin film studio during the day.

It was at this time that he met and married his first wife, Madelyn Saloshin. The next year he made his first movie, “Outwitting Dad”, for the Lubin studio. He was billed as O. N. Hardy, taking his father’s name as a memorial. He was known as  Oliver Hardy for the remainder of his professional life. In his personal life, he was known as “Babe” Hardy instead — a nickname that he was given by an Italian barber, who applied talc to Oliver’s cheeks and say, “nice-a-bab-y”. In many of his later films at Lubin, he was billed as  Babe Hardy.

By 1915, he had made 50 short 1-reeler films at the Lubin studio. He later moved to New York and made films for the Pathe, Casino, and Edison studios. He then returned to Jacksonville and made films for the Vim and King Bee studios. He worked with  Charlie Chaplin imitator Billy West during this time. In 1917,  Oliver Hardy moved to Los Angeles, working freelance for several Hollywood studios. The next year, he appeared in the movie “The Lucky Dog“, produced by “Bronco Billy” Anderson and starring a young English comedian named  Stan Laurel.  Oliver Hardy played the part of a robber, trying to stick up Stan’s character. They did not work together again for several years, eventually forming the famous team of Laurel and Hardy.

Between 1918 and 1923  Oliver Hardy made more than 40 films for Vitagraph, playing the “heavy” for Larry Semon, another  Charlie Chaplin imitator. In 1919, he separated from his wife, ending with a divorce in 1920, due to Babe’s infidelity. The very next year,  Babe married again, to Myrtle Reeves. This marriage was also unhappy, with Myrtle eventually becoming an alcoholic.

Oliver Hardy at the Roach Studios, prior to Laurel and Hardy

In 1924,  Oliver Hardy began working at Roach Studios, where he made some of his best films, working with the Our Gang films and Charley Chase. In 1925, he was in a film “Yes, Yes, Nanette!” starring James Finlayson, who in later years was a recurring character in the Laurel and Hardy film series. The film was directed by Stan Laurel. 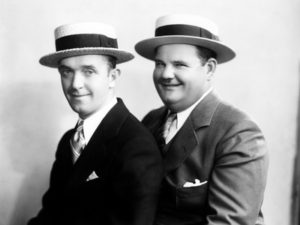 In 1926,  a hot leg of lamb changed the future of both Laurel and Hardy.  Oliver Hardy was scheduled to appear in “Get ‘Em Young” but was unexpectedly hospitalized after being burned by a hot leg of lamb. Stan Laurel, who had been working as a gag man and director at Roach Studios, was recruited to fill in. Stan kept appearing in front of the camera rather than behind it, and later that appeared in the same movie as Oliver, “45 Minutes From Hollywood”, although they didn’t share any scenes together.

In 1927,  Stan Laurel and Oliver Hardy began sharing screen time together in “Slipping Wives“, “Duck Soup” (no relation to the  Marx Brothers film of the same name) and “With Love and Hisses“. Roach Studios’ supervising director Leo McCarey had realized the audience reaction to the two and had begun intentionally teaming them together, leading to the start of the “Laurel and Hardy” series late that year. 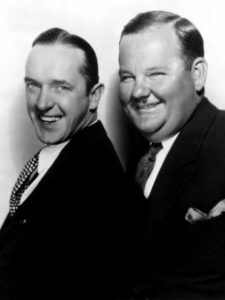 Laurel and Hardy made the transition to talking films with “Unaccustomed as We Are” in 1929, a feat that many of their contemporaries stumbled over. Their comic bond was even stronger with sound, and they used sound to comedic effect, never more so than in “The Music Box” in 1932. The won an  Academy Award for this picture. 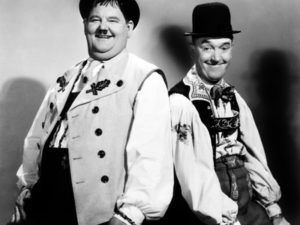 In 1936, Oliver Hardy’s personal life suffered another blow as he and Myrtle divorced.

In 1939, Stan Laurel refused to renew his contract with  Roach Studios. Roach had kept each of them on separate contracts, with each set to expire at different times. Roach felt that this gave him maximum control over the very popular team of Laurel and Hardy, but Stan had finally had enough. While waiting for the issue to be resolved,  Oliver Hardy made the film “Zenobia“ with  Harry Langdon — a surprisingly funny film.

Eventually, Stan got his way, and the boys were both signed to new contracts, and the team was loaned out to General Services Studio to make “Flying Deuces” — one of Laurel and Hardy’s most well-known films. While on the lot, Babe fell in love with  Virginia Lucille Jones, a script girl, whom he married the next year. Laurel and Hardy also began performing for the USO, supporting the Allied troops during World War II. They also made “A Chump at Oxford (1940)” (a classic, where Stanley “recovers” his memory and becomes a genius professor, with some humorous role reversals in Laurel and Hardy’s relationship) and “Saps at Sea (1940).”

Beginning in 1941, Laurel and Hardy were beginning a decline in their professional careers. They left Roach Studios and began making films for 20th Century Fox, and later MGM. Although they were financially better off, they had very little artistic control at the large studios, and the films they made reflected that.

Laurel and Hardy on tour

In 1947, Laurel and Hardy left Hollywood to begin a six-week tour of the  English Music Halls. It enabled Stan to visit his home country, as well as serving to prove to Laurel and Hardy that they hadn’t lost their touch over the last six years of less than successful comedy films. In answer to that question, their six-week tour was extended to nearly a year and grew to include engagements in Scandinavia, Belgium, France, as well as a  Royal Command Performance for King George and Queen Elizabeth.

In 1949,  Oliver Hardy’s friend, John Wayne, asked him to play a supporting role in Wayne’s latest film, “The Fighting Kentuckian.” Oliver had previously worked with John Wayne and John Ford in a charity production of the play “What Price Glory” while Stan began treatment for his diabetes a few years previously. Oliver initially refused, due to his loyalty to his partner, Stan Laurel. Stan, however, insisted that Oliver take the role, which he did, and did quite well. In the same way,  Frank Capra invited Oliver to play a cameo role in “Riding High” with  Bing Crosby in 1950.

In 1951, Laurel and Hardy made their final film and their worst. “Atoll K” (also known as “Utopia” ) was a simple concept; Stan inherits a boat, and the boys set out to sea, where they discover and claim a brand new island, rich in uranium, making them powerful and wealthy. However, it was produced by a consortium of European interests, with an international cast and crew that couldn’t speak to each other. In addition, the script needed to be rewritten by Stan to make it fit the comedy team’s style, and both Oliver and Stan suffered serious physical problems during the filming.

In 1954,  Oliver Hardy and Stan embarked on a third European tour, which again was a major success both financially and artistically for them.

The Beginning of the End for  Oliver Hardy

In 1955, it looked as though the new medium of television would provide an avenue for Laurel and Hardy to return to their former glories. The boys had contracted with Hal Roach Jr. to produce a series of TV shows based on the Mother Goose fables. However, this was never to be. Stan first suffered a stroke, which required a lengthy convalescence. Next,  Oliver Hardy suffered a heart attack and stroke later that year. Oliver never physically recovered.

Oliver Hardy, “Babe” to his friends, “Ollie” to people around the world, died on August 7, 1957, after a series of strokes.  His ashes were interred in the Masonic Garden of Valhalla Memorial Park in North Hollywood.