Synopsis of Laurel and Hardy’s Saps at Sea

In Saps at Sea, Oliver Hardy is suffering from “hornophobia” – the sound of a horn sends him into a maniacal rage, attacking anyone nearby.  Dr. James Finlayson prescribes a quiet rest at sea, but Oliver doesn’t want to go sailing.  Ollie’s friend Stan Laurel, however, makes the suggestion that they simply rent a boat and leave it tied to a dock, so Ollie can get the fresh sea air that he needs.  This actually works, until their goat named Narcissus eats through the rope that holds the un-seaworthy boat to the dock, and off it floats … with an escaped criminal on board, as well! 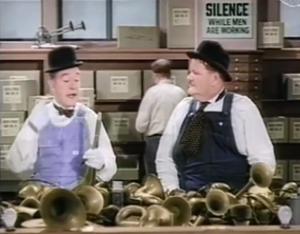 The good news is that Saps at Sea is one of the funniest movies that Laurel and Hardy ever made, which in turns makes it one of the funniest movies ever made.  The entire movie only runs for 60 minutes, and it simply amazes me that Laurel and Hardy were able to cram so much humor in such a short period of time.  For example, from the notes I took while watching, the following happens in the first 20 minutes of the film:

After Oliver Hardy is on the verge of a nervous breakdown, his manager sends him home to rest and see his doctor.  On the way out, Stan and Ollie mix up their coats (twice), a variation on their famous “derby swap”, the play with the swinging doors that lead out of the building.ince Stan Laurel is going to drive home he walks around to the drivers’ side, gets in the back seat in order to climb over the seat to get behind the driver’s wheel – just because! – and when the car starts, the horn gets stuck, and so

Since Stan Laurel is going to drive home he walks around to the drivers’ side, gets in the back seat in order to climb over the seat to get behind the driver’s wheel – just because! – and when the car starts, the horn gets stuck, and so Stan hits the engine with a hammer, which causes the engine to drop out completely, and Stan carries it to the back seat of the car.  He turns over the ignition, and the engine (now in the back seat) starts, and off they go – except that Stan has the car in reverse gear, and drives it through a storefront.

Once they get home, Stan does a wonderful clown bit where he pulls a nail out of his shoe, followed by a few yards of yarn – only to have unraveled his sock – and tries to get some cold water for Oliver, only to demonstrate that the apartment’s plumbing is crazy – turning on the cold water spigot causes hot water to come out of the other faucet, and vice versa.  Later, this leads to a cameo appearance by the cross-eyed Ben Turpin, whose responsible for ‘fixing’ the plumbing.

As neighbors walk in to check on Oliver Hardy, Stan Laurel accidentally slams the door in the face of Oliver’s doctor, played by long-time Laurel and Hardy foil James Finlayson.  Stan ‘helps’ the doctor at several points during the examination, including popping his finger joints.  As part of the exam, Dr. Finlayson has Oliver inflate the “lung tester” balloon to incredible dimensions, which devastate the entire room when it pops.  And that’s just the first 20 minutes. 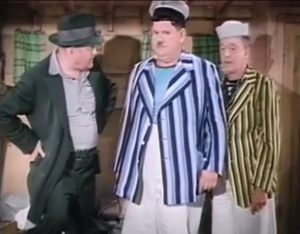 Dr. Finlayson prescribes a vacation at sea, where the salt sea air will do Oliver a world of good – and a strict diet of goat’s milk, which leads to Ollie trying to “demonstrate” how to milk a goat later.  They rent the dinky, untrustworthy boat “Prickly Heat”, and after the goat initially steals Stan Laurel’s bunk, they finally have a good night’s sleep.  during which an escaped criminal, played by Richard Cramer, comes on board.  and the goat eats through the rope that holds the boat to the dock, sending them floating out to sea.

The escaped criminal, Nick, quickly cows the boys, forcing them to make him some food.  even though they tell him that they don’t have any on board.  They decide to fake it and use the things they have (string for spaghetti, etc.).  but unknown to them, Nick hears their plan and eventually forces them to eat the inedible mess.  All seems lost until Stan starts to play his trombone, bringing Oliver into a rage and subduing the criminal.  Until Stan’s trombone falls apart, and he tries to put it back together in a panic while Ollie is being beaten, screaming “The horn!  Stan, play the horn!”

Eventually, he does, and they’re rescued by the Harbor Patrol.  Until at the very end, Stan plays his trombone and poor Oliver attacks the police, leading them to them being arrested – and put in the same cell as the criminal.

In short, Saps at Sea is absolutely hilarious, and I strongly recommend it.  I rate it 4 clowns out of 5.

Editorial review of Saps at Sea courtesy of Amazon.com

“Horns! Horns!” Yes, this is that Laurel and Hardy film: Ollie suffers a nervous breakdown working at a horn factory; the incessant sound of the instruments nearly drives him mad. When his doctor recommends a quiet vacation at sea, he and Stan decide to set sail in a small boat. But they have an unwelcome passenger: bulldog-puss Richard Cramer (a Laurel and Hardy regular), as an escaped criminal who forces them to help him get away. Cramer is delightfully nasty as the bad guy, who outsmarts their plan to poison him with fake food by making them eat it first. —Marshall Fine

Funny movie quotes from Laurel and Hardy’s Saps at Sea

Stanley Laurel (Stan Laurel): We must have been dis-unconnected.

Stanley Laurel (Stan Laurel): Hey! Which way is the alley?
Desk Clerk (Charlie Hall): Out in the street.

Trivia for Saps at Sea