A Day at the Races, starring the Marx Brothers

Synopsis for A Day at the Races 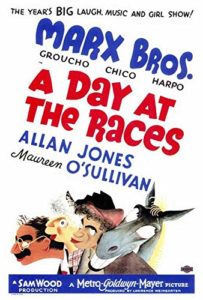 END_OF_DOCUMENT_TOKEN_TO_BE_REPLACED

Way Out West is one of my favorite Laurel and Hardy films, for several reasons.  It moves at a good pace, with lots of comedy both verbal and slapstick.  The film’s musical numbers actually fit well in with the story and aren’t long enough to distract from the film.  There are several classic moments, including the famous “tickling scene” between Stan Laurel and Sharon Lynn, Stan and Ollie dancing to The Trail of the Lonesome Pine, Ollie forcing Stan to eat his hat, and Stan “lighting” his thumb.
END_OF_DOCUMENT_TOKEN_TO_BE_REPLACED