This is a direct transcript from a section devoted to Buster Keaton in a 1949 article in Life Magazine by James Agee. It was written while Keaton was still alive and before the rediscovery of the majority of his films.

Buster Keaton started work at the age of 31/2 with his parents in one of the roughest acts in vaudeville (”The Three Keatons”; Harry Houdini gave the child the name Buster in admiration for a fall he took down a flight of stairs. In his first movies Keaton teamed with Fatty Arbuckle under Sennett. He went on to become one of Metro’s biggest stars and earners; a Keaton feature cost about $200,000 to make and reliably grossed $2 million. Very early in his movie career friends asked him why he never smiled on the screen. He didn’t realize he didn’t. He had got the dead-pan habit in variety; on the screen he had merely been so hard at work it never occurred to him that there was anything to smile about. Now he tried it just once and never again. He was by his whole style and nature so much the most deeply “silent” of the silent comedians that even a smile was as deafeningly out of key as a yell. In a way his pictures are like a transcendent juggling act in which it seems that the whole universe is in exquisite flying motion and the one point of response is the juggler’s effortless, uninterested face. 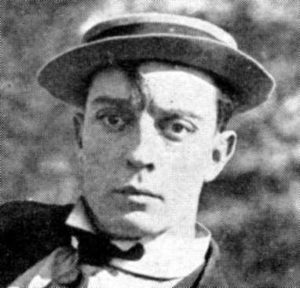 Keaton’s face ranked almost with Lincoln’s as an early American archetype; it was haunting, handsome, almost beautiful, yet it was irreducibly funny; he improved matters by topping it off with a deadly horizontal hat, as flat and thin as a phonograph record. One can never forget Keaton wearing it, standing erect as the prow of his little boat is being launched. The boat goes gradually down the skids and, just as grandly, straight on to the bottom. Keaton never budges. The last you see of him, the water lifts the hat off the stoic head and it floats away.

No other comedian could do as much with the dead-pan. He used this great, sad, motionless face to suggest various related things; a one track mind near the track’s end of pure insanity; mulish imperturbability under the wildest of circumstances; how dead a human being can get and still be alive; an awe-inspiring sort of patients and power to endure, proper to granite but uncanny in flesh and blood. Everything that he was and did bore out this rigid face and played laughs against it. When he moved his eyes, it was like seeing them move in a statue. His short-legged body was all sudden, machinelike angles, governed by a daft aplomb. When he swept a semaphorelike arm to point you could almost here the electrical impulse to the signal block. When he ran from a cop, his transitions from accelerating walk to easy jogtrot to brisk canter to headlong gallop to flogged-piston sprint – always floating, above this frenzy, the untroubled, untouchable face – were as distinct and as soberly in order as an automatic gearshift.

Keaton was a wonderfully resourceful inventor of mechanistic gags (he still spends much of his time fooling with Erector sets); as he ran afoul of locomotives, steamships prefabricated and over-electrified houses, he put himself through some of the hardest and cleverest punishment ever designed for laughs. In Sherlock Jr., boiling along on the handlebars of a motor cycle quite unaware that he has lost his driver, Keaton whips through city traffic, breaks up a tug-of-war, gets a shovel full of dirt in the face from each of a long line of Rockette-timed ditch diggers, approaches a log at high speed which is hinged open by dynamite precisely soon enough to let him through and, hitting an obstruction, leaves the handlebars like an arrow leaving a bow, whams through the window of a shack in which the heroin is about to be violated, and hits the heavy feet-first knocking him through the opposite wall. The whole sequence is as clean in motion as the trajectory of a bullet.

Much of the charm and edge of Keaton’s comedy, however, lay in the subtle leverages of expression he could work against his nominal dead pan. Trapped in the side wheel of a ferryboat, saving himself from drowning only by walking, then desperately running like a squirrel in a cage, his only real concern was, obviously, to keep his hat on. Confronted by Love, he was not as deadpan as he was cracked up to be, either; there was an odd, abrupt motion of his head which suggested a horse nipping at a sugar lump.

Keaton worked strictly for laughs, but his work came from so far inside a curious and original spirit that he achieved a great deal more besides, especially in his feature-length comedies. (For plain hard laughter his 19 short comedies – the negatives of which have been lost – were even better.) He was the only major comedian who kept sentiment almost entirely out of his work, and he brought pure physical comedy to its greatest heights. Beneath his lack of emotion, he was also uninsistently sardonic; deep below that, giving a disturbing tension and grandeur to the foolishness, for those who sensed it, in his comedy there was a freezing whisper not of pathos but of melancholia. With the humour, the craftsmanship and the action there was often, besides, a fine, still and sometimes dreamlike beauty. Much of his Civil War picture The General is within hailing distance of Mathew Brady. And there is a ghostly, unforgettable moment in The Navigator when, on a deserted, softly rolling ship, all the pale doors along a deck swing open as one behind Keaton and, as one, slam shut in a hair-raising illusion of noise.

Perhaps because ‘dry’ comedy is so much more rare and odd than ‘dry’ wit, there are people that never much cared for Keaton. Those who do cannot care mildly.

Up to the middle ‘30s Buster Keaton made several feature-length pictures (with such players as Jimmy Durante, Wallace Beery, and Robert Montgomery); he also made a couple of dozen talking shorts. Now and again he managed to get loose into motion, without having to talk and for a moment or so, the screen would start singing again. But his dark, dead voice, though it was in keeping with the visual character, tore his intensely silent style to bits and destroyed the illusion within which he worked. He gallantly and correctly refuses to regard himself as ‘retired.’ Besides occasional bits, spots and minor roles in Hollywood pictures, he has worked on summer stages, made talking comedies in France and Mexico and clowned in a French circus. This summer he played the straw hats in Three Men on a Horse. He is planning a television programme. He also has a working agreement with Metro. One of his jobs there is to construct comedy sequences for Red Skelton