The Great Dictator is possibly the most well-known of Charlie Chaplin’s films.  It was a timely satire on Nazism and fascism in general, and Adolph Hitler in particular. In it, Charlie Chaplin plays a double role:  Adenoid Hynkel, autocratic dictator of Tomania who blames the Jewish people for all of society’s ills.  And a Jewish Barber who happens to be the spitting image of Hynkel. END_OF_DOCUMENT_TOKEN_TO_BE_REPLACED

Synopsis of The Gold Rush 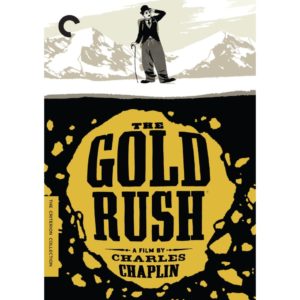 The Gold Rush is one of Charlie Chaplin’s greatest films. Like all of his films starring the Little Tramp, it is a silent.  It demonstrates very well why the silent movie is an art form in its’ own right.  Modern clowns would do well to learn from a master of the art of pantomime by watching this film.  It’s Chaplin at his finest. Chaplin and his crew do an excellent job of telling the story without dialog, and it moves from funny to poignant to sad to touching and back to funny again.

END_OF_DOCUMENT_TOKEN_TO_BE_REPLACED

Synopsis of Charlie Chaplin’s The Circus: 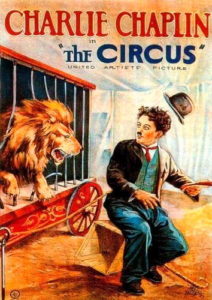 The Circus is one of the Little Tramp’s most poignant roles, as well as one of Charlie Chaplin’s funniest silent movies — for which he won a special Oscar. It begins with the Tramp attending a small circus that comes to town.  He haphazardly bumps into a pickpocket, who hides his ill-gotten goods in the Tramp’s pocket. This soon leads to a marvelous chase, with the police chasing both the pickpocket and the Tramp.  At one point the pickpocket and the Tramp are running in parallel, and the Tramp politely tips his hat to the thief. After a chase through the hall of mirrors (which has to be seen), the Tramp accidentally runs into the circus’ center ring, where he is unintentionally hilarious. END_OF_DOCUMENT_TOKEN_TO_BE_REPLACED

Limelight is a truly wonderful film; it swiftly became one of my favorites. In a nutshell, it’s the story of a once-great stage comedian (Calvero, a formerly great tramp clown, played by  Charlie Chaplin), who’s been failing in his career, and has become an alcoholic, who saves the life of  Terry, a despondent ballerina (played by  Claire Bloom) from a suicide attempt. The film is a juxtaposition of these two personalities, one who rallies & goes onward, the other who falls further. END_OF_DOCUMENT_TOKEN_TO_BE_REPLACED

In  The Pilgrim, Charlie Chaplin plays his traditional  Charlie the Tramp role, as an escaped convict trying to head as far away from the prison as possible.   He quickly ditches his prison uniform, and ‘borrows’ a minister’s clothing and hat instead.   He goes to a train station, hoping to ride as far away as possible.  But before he can enter, a young couple, hoping to elope, spy him.  They want him to marry them before the girl’s father arrives.   They immediately chase after him, and Charlie, not knowing what’s going on tries to run away, only to run into a police officer.  Charlie becomes like a human ping-pong ball between the couple, the police officer, and the young woman’s father.   In this film,  wherever Charlie turns, he seems to  be running into police officers  – to good comic effect
END_OF_DOCUMENT_TOKEN_TO_BE_REPLACED

A Countess from Hong Kong

Charlie Chaplin’s last film is the cinematic equivalent of Willie Mays staying too long in baseball–a sad farewell from someone who has clearly lost his touch. Marlon Brando (who famously did not get along with Chaplin and initiated, with this film, his curious habit of undermining his directors’ best intentions) plays an American millionaire leaving Hong Kong to assume an ambassadorship. He discovers Sophia Loren–playing a daughter of Russian aristocrats and a former gangster moll–concealed in his closet onboard the outbound ship, hoping to gain passage to the States. END_OF_DOCUMENT_TOKEN_TO_BE_REPLACED 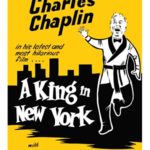 There are some people who consider A King in New York to be a bitter screed against the United States of America by Charlie Chaplin, after his exile from it.   I totally disagree.  I would say that it’s a satire, poking fun at parts of America that need to be deflated.  But with a true love for the country.   Take, for example, this quote by Charlie Chaplin’s character, King Shahdov, from early in the film:

“If you knew what it means to breathe this free air, this wonderful, wonderful America, its’ youth, its’ genius, its’ vitality.   The glamor of it all — New York! America!” END_OF_DOCUMENT_TOKEN_TO_BE_REPLACED

A biography of Charlie Chaplin, told in flashback by the elderly Chaplin, played unexpectedly well by Robert Downey Jr. A very good film, relatively balanced, displaying Charlie Chaplin’s creativity, as well as his private life. It shows Charlie Chaplin’s good and bad sides, including his penchant for underage girls. 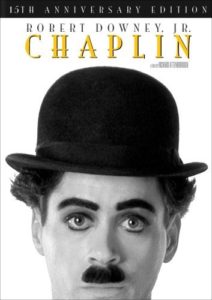 In short, it was a very well done movie; it captured the atmosphere of the time well, and I was frankly astonished at Robert Downey Jr.’s performance. I’ve never been of fan of his, or Kevin Kline’s for that matter, but everyone gave bravura performances. END_OF_DOCUMENT_TOKEN_TO_BE_REPLACED

The Chaplin Revue (1959) — containing A Dog’s Life, Shoulder Arms, Sunnyside, A Day’s Pleasure, The Idle Class, Payday, and The Pilgrim

Synopsis of The Chaplin Revue:

The Chaplin Revue is a 2 DVD set of some of Charlie Chaplin’s finest silent films. In 1959, Charlie Chaplin created “The Chaplin Revue” by stringing together A Dog’s Life, Shoulder Arms, and The Pilgrim together with some new footage to connect the three films together.   In addition to those three, the DVDs also include Sunnyside, A Day’s Pleasure, The Idle Class, and Pay Day. END_OF_DOCUMENT_TOKEN_TO_BE_REPLACED

Modern Times begins with Charlie Chaplin as Charlie the Little Tramp gainfully employed at a factory.  Although the strict regimentation is driving him to the brink …  And then over the brink, when the factory owner has him as the “guinea pig” for a “time-saving” feeding machine.  This leads to Charlie spending time in a mental hospital.   Cured after his breakdown, he is arrested and jailed.  After he innocently picks up a red flag that has fallen off the back of a truck and runs down the street to return it.  Just when a communist demonstration comes around the corner. He meets Paulette Goddard as “The Gamin” (a street urchin) in the back of the police van.  She has been arrested for stealing bread. From then on the theme is about the two trying to get along in … modern times END_OF_DOCUMENT_TOKEN_TO_BE_REPLACED