Product Description of  Chaplin – A Life

Born in London in 1889,  Charlie Chaplin grew up in dire poverty. Both his parents were in show business, but severe alcoholism cut short his father’s flourishing career, and his beloved mother first lost her voice, then lost her mind to syphilis. Charlie at age seven was committed to the Hanwell School for Orphans and Destitute Children. How then did this poor, lonely child become such an extraordinary comedian, known and celebrated worldwide? 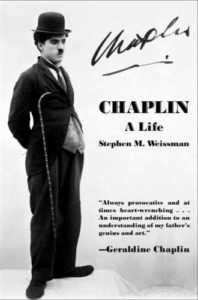 Chaplin cut his teeth in British music halls, but it was America that made him. At age twenty-five, he was touring here with a vaudeville troupe when his talents caught the eye of entertainment entrepreneur Mack Sennett, who spirited him off to California and signed him to a film contract. Chaplin became Sennett’s star comedian, and by twenty-eight the actor had become a millionaire and the world’s greatest celebrity. Weissman traces Chaplin’s life and the sources of his genius in fascinating detail, demonstrating how his tragic childhood shaped his personality and his art.Infamous for his politics and his scandalous sex life, Chaplin was a much more complex and contradictory character than has hitherto been known. Weissman brilliantly illuminates both the screen legend and the turbulent era through which he lived and worked.

Stephen Weissman, M.D., is the author of His Brother’s Keeper: A Psychobiography of Samuel Taylor Coleridge. A professor of psychiatry at the Washington School of Psychiatry, he lives in Washington, D.C.