Grock, Karl Adrien Wettch, inducted into the clown hall of fame in 1992 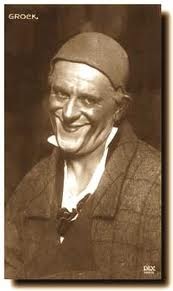 Inducted into the Clown Hall of Fame in 1992, Swiss born Karl Adrien Wettach became the toast of European entertainment as “Grock” the clown. The son of a watchmaker, he became an amateur acrobat and was allowed to spend each summer with a circus, where he performed first as a tumbler and then as a violinist, pianist, and xylophonist. He became the partner of a clown named Brick and changed his name to Grock in 1903. Together they appeared in France, North Africa, and South America. When Brick married, Grock joined the celebrated clown Antonet (Umberto Guillaume). At Berlin, appearing on a stage instead of in an arena, they failed at first; but, by mastering the stage technique, they obtained a London engagement in 1911.

Two years later Grock perfected the adventures of a simpleton among musical instruments that made many a European audience laugh – at his wonder as to where the strings had gone when he held his fiddle the wrong side up. The talented musician, who could play 24 instruments and speak many languages, became the king of clowns in the early 1900’s. Grock performed for some of Europeâs royalty. He also started a successful music publishing business for his popular songs. 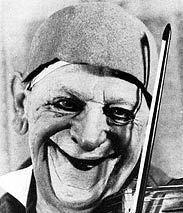 In 1924 he left England and remained on the European continent until his farewell performance at age 74 in Hamburg, Germany, on October 30, 1954. Grock wrote several books, among them his autobiography, Die Memoiren des Koenigs der Clowns (1956; Grock, King of Clowns), and Life’s a Lark. His performances have been preserved on film. The highest-paid artist at one time in Europe, Grock went broke after buying a circus tent for his variety show after World War II. However, he recovered financially through successful tours. He retired to the castle he had built in the 1920’s on the French Riviera.

“The genius of clowning is transforming the little, everyday annoyances, not only overcoming, but actually transforming them into something strange and terrificâ¦ it is the power to extract mirth for millions out of nothing and less than nothing.”

You may enjoy this photo gallery of Grock as well.

I received an e-mail from a talented artist in the Netherlands, Lydia van Domburgh. She is a professional painter, with numerous paintings of Grock (two examples below). If anyone is interested, feel free to check out her web site at http://www.domburgh.myweb.nl/.  If you are fluent in Dutch, of course :o)