I’ve been a long-time fan of the original  Twilight Zone series – this episode is an excellent example of why.   Something that Rod Serling tended to do multiple times throughout the series was to take a comedian/clown, and puts him in an unusual, dramatic role, to great result.   The first time that he did this was with  Ed Wynn in the second episode for the Twilight Zone season 1, One for the Angels, who puts in a wonderful performance.

As Mr. Serling narrated at the beginning of the episode,  “Street scene: summer. The present. Man on a sidewalk named Lew Bookman, age sixtyish. Occupation: pitchman. Lew Bookman, a fixture of the summer, a rather minor component to a hot July, a nondescript, commonplace little man whose life is a treadmill built out of sidewalks. In just a moment, Lew Bookman will have to concern himself with survival, because as of three o’clock this hot July afternoon he’ll be stalked by Mr. Death.” 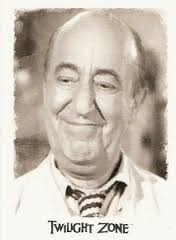 Lewis J. Bookman (played by Ed Wynn) is a street vendor living in a large city, a man who loves children, and especially the children in his apartment building.   His quiet life is interrupted by a visit from Death himself, who has come to inform him of his approaching death that very night.   Lewis Bookman tries to talk his way out of it to no avail – Death explains that postponements are very rare, reserved for hardship cases, or scientists on the verge of a great discovery, or for someone who has a great, unfinished work.

Almost inadvertently, Lewis Bookman reveals that he has one lifelong goal he hasn’t achieved – a really great sales pitch, one that would make the heavens open up – a pitch for the angels.   Death agrees to postpone Bookman’s death until he has a chance to make that pitch – which Bookman reveals will be never!   If he makes no more sales pitches, he can’t die.   So, Mr. Death makes other arrangements.   At that moment, there is a traffic accident outside of the apartment building.   One of the children from the apartment has been hit by a car.   The little girl, critically wounded, can now see Mr. Death, who previously has been invisible to everyone except Lewis Bookman.

A pitch for the angels

The doctor visits, and says that the critical hour will be midnight; if the girl makes it past midnight, she’ll be fine.   Of course, midnight was the time of Death’s original appointment.   The only hope that the little girl has is that Mr. Death will miss his appointment – which has never happened.   So, shortly before midnight, Lewis Bookman starts a late-night sales pitch, with Death as his only potential customer – a truly great pitch, “one for the angels” which causes Mr. Death to miss his appointment, and the little girl lives.   Which means, of course, that Mr. Death has kept his word, and Lewis J. Bookman’s time on this Earth is over.

Mr. Serling concludes with  “Lewis J. Bookman, age sixtyish. Occupation: pitchman. Formerly a fixture of the summer, formerly a rather minor component to a hot July. But throughout his life, a man beloved by the children, and therefore a most important man. Couldn’t happen, you say? Probably not in most places – but it did happen in the Twilight Zone.”

In conclusion, a wonderful episode, a truly great drama.   I find it very interesting that Rod Serling chose to cast Ed Wynn as Lewis J. Bookman – he is not the fast-talking type of person that the role calls for; yet, Mr. Serling wrote the script, based on something that he had written in college, with Ed Wynn in mind.   And Ed Wynn proved himself as capable of drama as he was of comedy.