Three on a Couch

Three on a Couch is a Jerry Lewis comedy that’s both funny and charming.   The basic plot is that Jerry Lewis’ character, Christopher Pride, is an artist who has won a prestigious French art contest, winning a large monetary prize, as well as the opportunity to live in Paris, France for a year.   He intends to take his fiancee, Dr. Elizabeth Acord (played by Janet Leigh) along so that they can be married.   But there’s a problem. 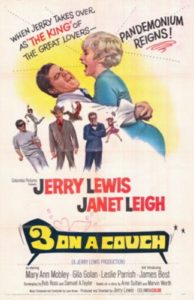 Elizabeth is a psychiatrist, and she has three female patients that she feels that she can’t leave — all three have been rejected by men and are dependent on her for help.   Christopher’s best friend and Elizabeth’s office neighbor, Dr. Ben Mizer (played extremely well by James Best) has an idea that he shares with Christopher/Jerry Lewis — but not with Elizabeth.  All Christopher/Jerry Lewis has to do is disguise himself as the man of each woman’s dreams, and romance them, so that they realize that not all men are cads.  And Christopher and Elizabeth can go to Paris and live happily ever after.

One of the things that Jerry Lewis is best known for is playing multiple roles, and the plot of Three on a Couch gives him ample opportunity to do so.  But in a very believable way.   Three on a Couch is more serious than many of Jerry Lewis’ other movies, and is very funny as well.   Besides Christopher, Jerry Lewis plays  Ringo Raintree, the epitome of the American West cowboy (whom the French patient falls for), Rutherford the zoologist (and Rutherford’s twin sister, Heather — and Jerry Lewis is hilarious in drag) that southern belle Mary Lou Mauve (played by Leslie Parrish) falls for, and Warren whom the ultra-athletic Susan falls in love with.

The interactions with each of the three women give Jerry Lewis room to flex his ample comedic muscles, and he’s very funny.  As is James Best, whom I was very pleasantly surprised by.   I only knew him from his role on The Dukes of Hazzard and didn’t realize that he was as funny as he was — or as capable an actor.   In the first third of the movie, there’s a very serious moment between the two doctors, arguing about the limits of their professional responsibility.  And it was done extremely well.

The movie comes to a comedic head, however, when Christopher and Elizabeth are preparing to leave for France, and throw a farewell party.  Where each of the three patients shows up! It’s frenetic Jerry Lewis as he changes from character to character to interact with each of the women, with the entire charade finally being exposed.  And a happy ending results anyway.

A very funny movie, especially for Jerry Lewis fans.  I rate it 3 clowns out of five.

[Christopher (Jerry Lewis) learns from the French ambassador that he has won a prize for his art work]
The Ambassador: Ze first prise is fifty thousand francs. In American money, zat ees ten thousand dollars.
The Attache: Give or take a little.
Christopher Pride (Jerry Lewis): As long as you give, I’ll take.

Dr. Elizabeth Accord (Janet Leigh): Chris, I have patients.
Christopher Pride: I’m losing my patience, Elizabeth. Those patients that you’re talking about you can give to other psychiatrists.   There are many psychiatrists in this town.   For that matter, they’re all in this building.

Mary Lou Mauve: If y’all would — scuse me, Ah’m lookin’ for the doctor.
The Drunk: Oh, I happen to be a doctor, but I’m not in surgery today. You see, I’m driving the ambulance. Say, what’s your name?
Mary Lou Mauve: Ah do declare!
The Drunk: Clare. Oh, that’s a pretty name!