The Prize Fighter is a very funny, very sweet comedy.  Set in Depression-era America, Tim Conway stars as Bags Collins who has a perfect record as a boxer – twenty fights, twenty knockouts—and twenty losses.  His manager, Shakes, is the ‘brains’ of the team, played by Don Knotts.  However, his luck starts to change, and Bags starts to win against other ‘loser’ boxers and eventually gets a shot at the title in his weight category.  Unfortunately, this is when they find out that the fight has been rigged, and that Bags is expected to throw the fight, or face the wrath of the mob… 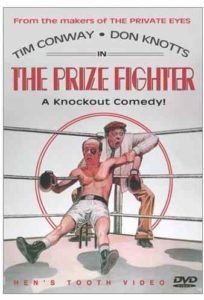 A wonderful movie with the boxing scenes being truly great slapstick.  Don Knotts and Tim Conway effectively play their characters from The Apple Dumpling Gang here, transplanted to the 1930’s, and are a wonderful comedy team.  A very funny movie, which isn’t surprising since Tim Conway wrote it as well as co-starring in it.

Editorial review of The Prize Fighter courtesy of Amazon.com

Don Knotts, Tim Conway. A down-and-out boxer with a losing record suddenly starts winning fights and challenges the defending champ to a match. Little does the hapless fighter know his trainer has been fixing fights with the Mob.

The King of Comedy