Laurel and Hardy‘s short film, Brats, has been often imitated, never duplicated, and extremely funny.  The basic premise is that Stan Laurel and Oliver Hardy are staying at home, watching their sons while their wives are out.  They also play the role of their sons, using, using over-sized furniture and split screen shots.  The film begins with the fathers playing checkers, where the dimwitted Stan is easily beating Ollie – a very funny scene.  The little boys seem to keep fighting, and interrupting the adults.  Whether it’s fighting over blocks, who’s going to be “it”, or breaking a vase, the little boys are constantly getting into trouble until their fathers send them into bed. END_OF_DOCUMENT_TOKEN_TO_BE_REPLACED

Hog Wild begins simply enough, with Oliver Hardy at home, looking for his hat … With his wife and maid snickering at him since it’s on his head the entire time.  Once Ollie realizes that he attempts to rescue a little of his dignity, and announces that he’s going out.  His controlling wife, however, lets him know in no uncertain terms that he’s putting up the radio antenna on the roof.  END_OF_DOCUMENT_TOKEN_TO_BE_REPLACED Another Fine Mess is an early talking Laurel and Hardy short film, and is an extremely funny short film.  The basic plot has Stan Laurel and Oliver Hardy on the run from the police, not wanting to go to jail for vagrancy.  They run into a mansion, in order to hide there, but it turns out that the owner Colonel Buckshot (played by Laurel and Hardy regular James Finlayson) is leaving the country for a safari, and has advertised his mansion as being for rent.  Unfortunately for Stan and Ollie, potential renters arrive while the police are still looking for them outside, and so Ollie impersonates Lord Buckshot, and Stan takes the role of “Hives” the butler. END_OF_DOCUMENT_TOKEN_TO_BE_REPLACED After 42 burglaries in a week — with no arrests — police office Edgar Kennedy has his job hanging by a thread.  Fellow police officers joke that the only way that Kennedy will ever make an arrest is to frame someone.  He acts on that idea upon finding vagrants Oliver Hardy and Stan Laurel sleeping on a public park bench. END_OF_DOCUMENT_TOKEN_TO_BE_REPLACED 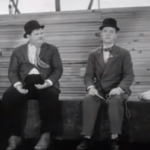 The Laurel-Hardy Murder Case is more of a spoof of the haunted house movie, rather than an actual murder mystery, but the interplay between Stan Laurel and Oliver Hardy make it all worthwhile. The movie begins with Laurel and Hardy fishing off the end of a pier, when they discover that Stanley’s rich uncle Ebenezer had died, leaving a fortune. However, once Stan Laurel and Oliver Hardy arrive at the mansion for the reading of the will, they learn that Uncle Ebenezer was murdered, and the police detective investigating the murder is keeping Stan and all of the other relatives at the mansion until the murderer is found. END_OF_DOCUMENT_TOKEN_TO_BE_REPLACED

In Blotto, during the prohibition period in the United States, Laurel and Hardy make plans to spend a wild night out at the Rainbow club. Phoning Stan at home, Ollie suggests a plan to henpecked Stan on how to get out of the house. Stan offers to bring a bottle of liquor which his wife has hidden in the house. Mrs. Laurel, eavesdropping on another line, immediately launches a scheme of her own: she replaces the alcohol with a non-alcoholic mixture. Stan and Ollie proceed to get “drunk” at the nightclub, having a wonderful time, until an angry Mrs. Laurel turns up armed with a shotgun, reveals that their “liquor” is merely cold tea, chases them into the street, and demolishes their cab with one well-aimed shot. END_OF_DOCUMENT_TOKEN_TO_BE_REPLACED