In Million Dollar Legs, W. C. Fields is the president of the bankrupt nation of Klopstokia.  He needs 8,000,000 dollars, his daughter falls in love with a brush salesman, and his cabinet wants to overthrow him.  How can he solve all of these problems at once? By having Klopstokia win the 1932 Olympics! END_OF_DOCUMENT_TOKEN_TO_BE_REPLACED

A Sea Dog’s Tale is a Mack Sennet comedy starring Billy Bevan, but begins somewhere in the South Seas, where the cast (people in black-face) are having a contest. The contest involves spear throwing at a victim.  It’s ultimately won by Jo Jo (Vernon Dent, best known for his work with the Three Stooges).   Jo Jo wants to use his notoriety to marry the beautiful daughter of Chief Gumbo (Andy Clyde). However, she refuses, having seen in their weekly newspaper (seriously) a photo of a champion pancake eater Wilbur Waters (Billy Bevan), and deciding that she’ll marry only him. END_OF_DOCUMENT_TOKEN_TO_BE_REPLACED 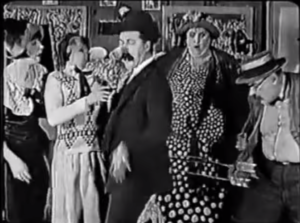 You likely know someone who laughs at everyone else’s misfortune – especially when he causes it.   In a nutshell, that’s the character that Billy Bevan plays here.  He’s ordered by his boss to head out to their California office, hence the title. He calls up his wife, packs their car, and starts driving to California.   Along the way, he runs (literally) into another couple relocating to California — Vernon Dent (of Three Stooges fame) and Thelma Hill.   From the beginning, Billy’s helpful advice causes grief (and slapstick violence) to Vernon Dent — backing into his motor home and leaving him dangling off a cliff (a funny scene), breaking Vernon’s axe on a petrified tree, drenching Vernon with the juice of a cactus (a very funny scene, with Vernon playing his part to the hilt), convincing them that they’re under attack from the ‘Hop-Eye Indians’ and so on, finally arriving in California. END_OF_DOCUMENT_TOKEN_TO_BE_REPLACED 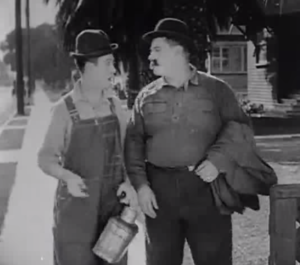 Saturday Afternoon is a pleasant silent comedy, starring Harry Langdon as Harry Higgins, the ultimate in henpecked husbands, who at the urging of his friend Steve Smith (Vernon Dent) accompanies him on a ‘date’ with two young ladies that Steve has found. END_OF_DOCUMENT_TOKEN_TO_BE_REPLACED