In Million Dollar Legs, W. C. Fields is the president of the bankrupt nation of Klopstokia.  He needs 8,000,000 dollars, his daughter falls in love with a brush salesman, and his cabinet wants to overthrow him.  How can he solve all of these problems at once? By having Klopstokia win the 1932 Olympics!

Million Dollar Legs is a zany, madcap comedy that’s absolutely hilarious, with many of the great clowns of the time.  It’s fast-paced, funny, zany, and strongly recommended.  Million Dollar Legs is one of those rare comedies that gets funnier with repeated viewing.  It’s a madcap movie that you’d associate with the Marx Brothers.  In fact, it was written for them, but they turned it down.  Another connection with them is that star Rhonda Fleming later married Harpo. 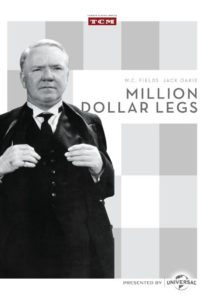 W.C. Fields plays the President of Klopstokia, a bankrupt European country that makes a bid for fame and fortune by entering its top athletes in the 1932 Summer Games in Los Angeles. Directed by Edward Cline (The Bank Dick, 1940) and co-written by Joseph L. Mankiewicz (All About Eve, 1950), this madcap, Pre-Code comedy is one of W.C. Fields’s most anarchic satires and includes scene-stealing performances by comic character actors Jack Oakie, Billy Gilbert, Hugh Herbert and Ben Turpin.