Synopsis of The Bank Dick

﻿W. C. Fields stars as an unemployed, henpecked drunk who spends most of his time at the Black Pussy Cat café. Things take a turn for the absurd when he unwittingly captures a bank robber and lands a job as a security guard. Written by Fields under the pseudonym Mahatma Kane Jeeves and featuring one of his most hilarious performances, The Bank Dick is an undisputed classic of American comedy. Criterion is proud to present Fields’ last major film in a new digital transfer, with English subtitles for the deaf and hearing impaired.

Review of The Bank Dick

The Bank Dick is one of W. C. Fields’ most famous films – and with very good reason.  He plays the likeable, lazy, inebriate.  A man who avoids work, exaggerates his exploits, and even gets hired as a movie director – for a few minutes.  He prevents a bank robbery by accident and becomes a bank guard (‘bank dick’) as a reward.  And gets his future son-in-law in trouble.  My heart goes out to the poor bank examiner …

It’s a very funny, fast-paced comedy.  W. C. Fields’ life is surreal, with odd things happening time and again. But they seem natural, and hilariously funny as well!  The “dramatic chase” at the end of movie is flat-out hilarious, as is most of the movie.  It’s one of the great comedies for a reason, and highly recommended.

Cast of characters in The Bank Dick

Editorial review of The Bank Dick 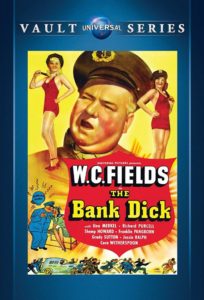 High on the list of W.C. Fields’s achievements is this 74-minute feature from 1940, rich in his brilliantly rambling inspiration. Fields plays Egbert Sousé (pronounced Soo ‘zay, of course), who manages to foil a bank robbery, tilt a glass in the Black Pussy Cafe, and marry his daughter to Og Oggilby (Grady Sutton) before the closing credits. Maintaining his usual and deliberate half-step behind the rest of the world, Fields’s characteristic persona gets a truly worthy movie here that always seems, wonderfully, to be on the verge of racing ahead of him. —Tom Keogh