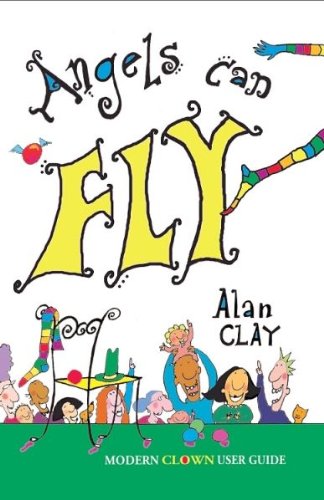 Clown is a fascinating, diverse, complex and exciting art form, which has existed around the planet for thousands of years. Like any art form it has to evolve to stay relevant to the culture nurturing it, and at the same time, and by its very nature, clown teases and turns upside down the cultural patterns and boundaries around us.

This book is an attempt to chart the growth of modern clown, and to promote that process by providing, not only practical exercises for individuals and groups, but also reference points for thinking.

Angels can Fly includes a mix of fiction, following the adventures of ten clowns, some personal anecdotes from clowns from around the world, a total of 50 practical clown exercises, and some theory on the nature of modern clown.

About the Author of  Angels Can Fly, a modern clown guide

Born in 1954 in Wanganui, Alan Clay grew up in Auckland, New Zealand. He studied clown in Sweden in 1977 and has taught and performed extensively in Europe, Australia and New Zealand.

For the past fourteen years Alan has lived in Sydney, Australia, where he has run Playspace Studio, a physical theatre training centre which gained interanational recognition for a uniquely irreverent Australian approach to clown.