Be A Clown – the Complete Guide to Instant Clowning

(Editor’s note: this book should not be confused with the children’s book “Be A Clown” nor Mark Stolzenberg’s Be A Clown, and has no relation to Cole Porter’s classic song “Be A Clown”) 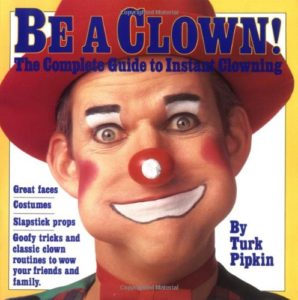 A very nice book – light and lively, easily read, many photos, with a good insight into the mind & heart of a clown. This lively, humorous handbook covers all aspects of clownmanship, including makeup, funny faces, costume (including inexpensive clown-size shoes), and props (including a favorite Red Skelton routine, the Bouncing Hankie). Encourages the reader to create a clown persona with many photos and suggestions. Several getting-started routines are included. Develop your own oddball walk, swallow chair legs — you’ll always have a stunt up your sleeve. Written by the towering Turk Pipkin, a 6′ 7″ professional clown.

Includes plastic clown nose (OK for starting, but you’ll want to get a “real” nose). The more I read it, the more I like it.

Are You Done Yet?

Clown Skits for Everyone, by Happy Jack Feder