Now You See It, Now You Don’t

Now You See It, Now You Don’t : Lessons in Sleight of Hand — by Bill Tarr, Barry Ross (Illustrator) 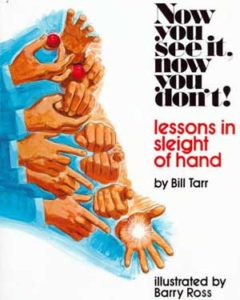 There are basically two types of magicians — gadgeteers and finger-flingers. Please note, this is not meant to insult either group. A gadgeteer tends toward self-working magic — things that are set up, and effectively work by themselves. This frees the magician to focus on presentation and entertainment, and not as much on the mechanics of the trick or illusion. Finger-flingers, on the other hand, tend toward actual sleight of hand, relying on their own skill to perform the seemingly impossible. This takes longer to master, but gives greater confidence, as well as the ability to perform anywhere, with whatever is at hand. This book is for those who want to be finger-flingers, or who want to look at that side of the aisle.

Bill Tarr has created a wonderful resource. It’s incredibly well-illustrated, showing both the magician’s & the audience’s view, for each trick or sleight. He also grades the individual tricks based on its’ difficulty.

He also is honest and up-front. He tells you straight away that this will require practise. For those seeking instant gratification, seek elsewhere. But if you’re willing to practice (none of the sleights of hand are difficult, but they do require time and effort — like learning anything else worth learning).

As a clown, which style will suit you best? Only you can decide. Some clowns are finger-flingers, others are gadgeteers. Many don’t “perform” magic at all. If it’s something you’re thinking about adding to your clown character, however, you owe it to yourself to give this book a look. One final caveat: this book is entirely about the mechanics of performing magic — you’ll find nothing about the psychology of performing, how to integrate it into your clowning, etc. — for that, I recommend  Clown Magic  by David Ginn.

Some of the sleights taught in this book include: