The Unusual History of Bozo the Clown

The Unusual History of Bozo the Clown.  Attempting to unravel who did what when in the creation of “Bozo, the World’s Most Famous Clown”

(Editor’s note: for fans of Bob Bell’s rendition of Bozo the Clown, WGN-TV will be showing Special: Bozo, Gar & Ray: WGN TV Classics, on Christmas Eve from 7-9 pm Central Standard Time, and again on Christmas Day from 2-4 pm, “A look back at three of WGN’s most beloved television series, “Bozo’s Circus,” “Garfield Goose and Friends” and “Ray Rayner and His Friends.” ) 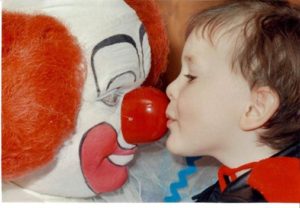 Most clowns are created and performed by one individual. There are exceptions, of course, such as the Harlequin, a character from the Comedia del Arte. A more contemporary exception is Bozo the Clown, who is owned, copyrighted, and trademarked property of Larry Harmon. But although Mr. Harmon has done an admirable job of marketing Bozo the Clown worldwide, the story of Bozo does not begin with him. Instead, it begins at Capitol Records, in 1946.

In 1946, Capitol Records was a rather small company, attempting to make an entrance into the children’s market. They hired a young man named Alan Livingston, who came up with an idea for a book that would have a record included.  Children would listen as they read, with an audio signal to turn the page. This was the world’s first “read-along” book, and was a huge hit for the small company. It starred a clown narrator, named Bozo.

Alan Livingston had hired Pinto Colvig to be the voice of Bozo the Clown. Pinto Colvig was a former circus clown, who at that time was doing character voices for Walt Disney, including Goofy and Snow White’s dwarf Grumpy, among others. And the book, “Bozo at the Circus,” written by Livingston, illustrated by M. Fischer, and voiced by Pinto Colvig, sold over a million copies. This was a success unheard of at that time for a children’s recording.

Bozo as a live person

The success of “Bozo at the Circus” generated more read-along books, including 15 that featured Bozo. The continued success led to various spinoffs, including Bozo dolls, and a demand for Bozo in person. In 1949, on KTTV in Los Angeles, California, Pinto Colvig became the first televised Bozo the Clown, with Bozo’s trademark hair, suit and white-faced clown make up.

In order to meet the demand for personal appearances by Bozo, Alan Livingston had hired numerous actors in several cities to perform as Bozo at various events. One of them, named Larry Harmon, became a pivotal point in Bozo’s history.

Larry Harmon and Bozo the Clown, the world’s most famous clown 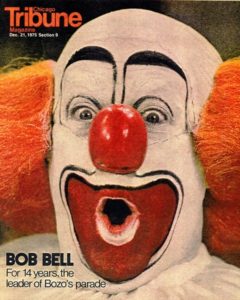 Together with a group of investors, Larry Harmon purchased the licensing rights to the Bozo character from Capitol Records. Larry Harmon had a great talent for marketing, and by the late 1950’s had created local Bozo TV shows in nearly every major U.S. market, and across the world in places as far away as Thailand, Greece and Brazil.

At this point, the history of Bozo diverges wildly, as numerous Bozos were operating simultaneously across the world. Notable individuals include Bob Bell, who portrayed Bozo for WGN-TV in Chicago for decades, eventually retiring and being replaced by Joey D’Auria, the longest-running, and last Bozo TV show.

In Washington, D.C. Bozo was portrayed for a time by Willard Scott, now well known as NBC weatherman. In Boston, Frank Avruch wore the giant shoes. Bill Britten was the Bozo for the New York City area.  And Larry Harmon created a well-known series of cartoons featuring Bozo as well. In recent years, Bozo has appeared to be in decline, as most of the TV franchises have gone away, in favor of nationally syndicated morning programming. However, DVD’s are now available of Frank Avurch’s portrayal. In addition, a new music record (CD, actually) titled “Get Down with the Clown” — proving that everything old is new again.

(Image of Bob Bell portraying Bozo the Clown on this page is courtesy WGN-TV’s “Bozo Timeline” – our thanks to them!)

Enjoy this photo gallery of Bozo the Clown.

Biography of Larry Harmon, promoter of Bozo the Clown