In simple English, the  magic chick pan  is my second-favorite clown prop.   I use it all the time, and I absolutely love it.   In a nutshell, it looks like a small pan with a cover.  It enables the clown or magician to make a small item appear, or change one small item into another.   You’ve likely seen amateur magicians put a piece of flash paper in it, set it on fire, cover the pan to extinguish the fire and then open it to reveal a baby chick (hence the name).   But it’s a  lot  more versatile than that. 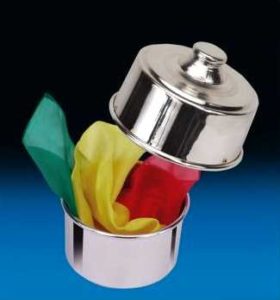 For example, I’ve used it in conjunction with spring flowers.  These are paper flowers with little springs inside, so that they ‘bloom’to a nice volume) in a routine that I do at birthday parties.  The routine can go on for 15 minutes, normally at the close of the show.   I use a spring puppet that looks like a skunk, “my friend Mr. Kitty,” and make a show of how he eats invisible seeds.   Would the kids like to see them?   I reach into my pocket and pull out a handful of invisible seeds (nothing but air, of course) and make sure that I dash around, so that all of the kids can look at the “invisible” seeds.   And then I ask them, what color are they?   (Amazingly, the kids will shout out half a dozen different colors!

In addition to the expected “nothing”, etc.) I then use an audience volunteer (typically the birthday child) and explain that, in order to see magic seeds, you need magic glasses.   I then put on the child “magic” glasses – the prop glasses that you can pick up at a dollar store or party goods store for about a dollar (U.S.) that look like thick glasses, but don’t actually affect your vision at all.   This is a wonderful opportunity for photos as well.

I then show the child the magic invisible seeds, and ask him or her what color they are.  At least half the time, the child will name a color; if the child does, I do a take and respond to the audience, “He’s crazier than me!   You can’t see invisible seeds!”  Otherwise I’ll reply, “Of course not!   They’re invisible!” In either event, call for a round of applause for the assistant, and let the child sit back down.   Next, I move on to making a magical garden, by “planting” the magical seeds in my “Kenner Easy-Bake Magical Seed Garden Grower – patent pending!” – the magic chick pan.   I cover the pan (which has the hidden spring flowers already inside it, set prior to the performance), and go through my magic wand routine.

Next, I explain that we’ll  need to use my magic wand, and that I’ll  need a volunteer to help me.   I normally pick the birthday boy or girl as the first volunteer, and use a multiplying wand to hand to the child, while pulling the other wands back.   The other children, of course, point out that I still have a wand in my hand, so I need another volunteer, etc. and keep doing this until I have six children up front with wands – it’s a wonderful audience participation bit, and makes the entire audience roll with laughter, as well as giving photo opportunities for the parents.   Depending on how many children are there, I’ll repeat it with other comedy magic wands, and if it’s a very large group,

I’ll end with asking the kids still seated to reach into their pockets and pull out the magic wands that God put at the ends of their hands (i.e. their fingers).   Everyone points their magic wands at the magic chick pan, while saying the magic words “Happy birthday Maurice!” (or whatever the child’s name is).   I then collect my wands back, and make sure that all of our volunteers (including the ones in the audience) get a big hand.

I then use David Ginn‘s Clown in trouble  routine (from his book,  Clown Magic) and take a peek inside the chick pan.  With a worried look I ask the children, “You don’t really want to see what’s in here, do you?”  Of course, they loudly tell me that they do!   I peek again, and ask “Wouldn’t you rather I make another balloon animal?”  NO!   Of course not.   So, following the rule of three, I peek one last time and slowly open the magic chick pan. I allow the spring flowers to unfurl “magically” to the “oohs” and “ahas” of the audience.  And I remind them to give themselves another big hand for being such wonderful helpers.

There are, of course, dozens if not hundreds of other routines that you can use with a chick pan.   For instance:

As I say, the  magic chick pan  is one of my favorite clown props, and I trust you can see why.  I hope you get as much mileage out of yours as I do out of mine.

The Joke’s on You