Synopsis of Hook, Line and Sinker

In  Hook, Line and Sinker,  Jerry Lewis plays the part of Peter Ingersoll, an unhappy insurance salesman who’s living the American Dream, only to be so caught up in the rat race that he’s unable to enjoy any part of his life.   His normal existence is interrupted, however, when his doctor (played by Peter Lawford) and best friend diagnoses him with a weak heart, and gives him the news that he only has a few months to live.

His wife (Anne Francis) encourages him to be happy in his last few months, and wants him to go fishing around the world, maxing out his credit cards to pay for it, since the credit card companies won’t be able to collect from a dead man.   He agrees, but lives to regret it when, after spending $100,000 his doctor tracks him down to tell him that his diagnosis was wrong, He’s now so deeply in debt that he can never get out, and his doctor friend comes up with a scheme to get out of it — having Jerry Lewis fake his own death.   However, there is something darker going on …

Hook, Line and Sinker is one of the Jerry Lewis movies that I remember watching when I was young.   I remember certain parts of it very well, primarily the ending — the entire movie is a build-up to a visual joke that fisherman will smile at, that I won’t ruin by giving away here.   However, for the most part, I don’t find it one of Jerry Lewis’ better movies.   The entire movie is told in flashback, as Jerry Lewis’ character is about to undergo surgery in a foreign country (Chile), where he tells the attending doctors how he came to have this unusual injury. 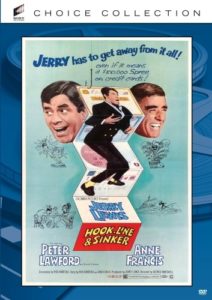 In flashback, he tells his story of life in suburbia, living the “American Dream” in the perfect American home.  Ironically, the set used for his home is the same one used on the Bewitched television series.  But he’s working at a job that he hates, running the rat race and despising it.   His home life is equally hectic (although I thought that the bathroom scene, where his young daughter kisses him with a face full of shaving cream was very sweet).  As is his social life (with Jerry Lewis regular, Katherine Freeman, in a small-yet-funny role as the babysitter).  As is his love life with his wife.   The only bright spot is his weekly fishing trip, which his money-conscious wife wants him to cut out altogether.

At this point, I was nearly expecting a social commentary on American society, in the vein of Charlie Chaplin‘s classic Modern Times.   Instead, the film turns a corner and becomes a different kind of commentary.   Jerry Lewis’ best friend is his doctor, played well by Peter Lawton.  Who tells him that he has a weak heart, and has months to live.   Jerry’s wife, played by the lovely Anne Francis, suggests that he commit credit card fraud, and spend his final months fishing in the places around the world that he only dreamed of to that point in his life.   He agrees, and goes fishing in a variety of foreign locales, giving Jerry Lewis opportunity for various comic moments, such as with a drunken Jerry Lewis learning — how low can you go —  while doing the limbo dance, mixing drinks, lighting an exceedingly long cigarette, etc.   Eventually, his doctor tracks him down and lets him known that he’s not dying after all.  And he’s now in debt to the credit card companies for 100,000 American dollars — a fortune at that time.

Jerry’s doctor suggests a different scheme to get him out of his problem — fake his own death.   The doctor will claim an unclaimed corpse at a foreign morgue, sign a falsified death certificate, and Jerry can live outside of the United States for seven years until the statute of limitations expires.   Again, there are some very funny moments, such as claiming a black-skinned man to be Jerry Lewis’ ‘corpse’.  But a monkey wrench is thrown into the works.   If you read any further, there’s a significant spoiler below.

Honest — read any further, and it will spoil it for you if you haven’t read the movie.

Last warning — I’d turn back if I were you”. (apologies to the signs outside the Wicked Witch’s castle in The Wizard of Oz)

Jerry inadvertently discovers that he’s been set up.   His best friend has been having an affair with his wife.  And they have concocted this scheme to have him out of the way, declared dead, and cash in his life insurance policy.   The movie ends with Jerry exposing their actions, getting his revenge, and going fishing to Chile.

Frankly, even though I’m a fan of Jerry Lewis, I really didn’t enjoy Hook, Line and Sinker.  The heavy subject matter seems to overwhelm the comedy.

How to Frame a Figg